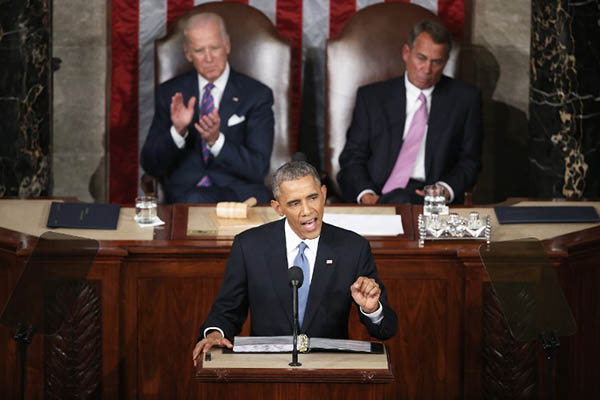 Washington stands side-by-side with victims of terror around the world, President Barack Obama vowed Tuesday, asking lawmakers to give him updated war powers to defeat Islamic militants in Iraq and Syria.

“We stand united with people around the world who’ve been targeted by terrorists—from a school in Pakistan to the streets of Paris,” Obama said in the country’s annual State of the Union address. “We will continue to hunt down terrorists and dismantle their networks.”

As Obama mentioned the shocking attack on Charlie Hebdo, in which many of France’s best-loved cartoonists were gunned down, U.S. lawmakers rose to their feet to pay tribute, some waving yellow pencils.

Democratic Representative Gwen Moore led the show of support in which about 40 lawmakers—mainly Democrats—held up standard pencils, tools of the cartoonists’ art. Moore’s office called the symbolic event a “unique opportunity to join our global partners in showing our collective support and solidarity.”

Obama asked U.S. lawmakers to give him updated war powers to use American military might to go after the Islamic State (I.S.) group, saying it would give his administration the authority it needs. “This effort will take time. It will require focus. But we will succeed,” he vowed.

The U.S. has already unleashed dozens of airstrikes against the militants since September, using the powers enshrined in legislation adopted in the wake of the 9/11 attacks to hunt down Al Qaeda. But U.S. officials have argued that a new Authorization for Use of Military Force (AUMF) is needed.

“Tonight, I call on this Congress to show the world that we are united in this mission by passing a resolution to authorize the use of force against ISIL,” Obama said. But he stressed U.S. officials “reserve the right to act unilaterally, as we’ve done relentlessly since I took office, to take out terrorists who pose a direct threat to us and our allies.”

Obama also denounced that “deplorable anti-Semitism” was again being seen in places around the world. And he added: “We continue to reject offensive stereotypes of Muslims,  the vast majority of whom share our commitment to peace.”

Promising to stand up for and respect human dignity, Obama also said the U.S. would “defend free speech, and advocate for political prisoners, and condemn the persecution of women, or religious minorities, or people who are lesbian, gay, bisexual, or transgender. We do these things not only because they’re right, but because they make us safer.”