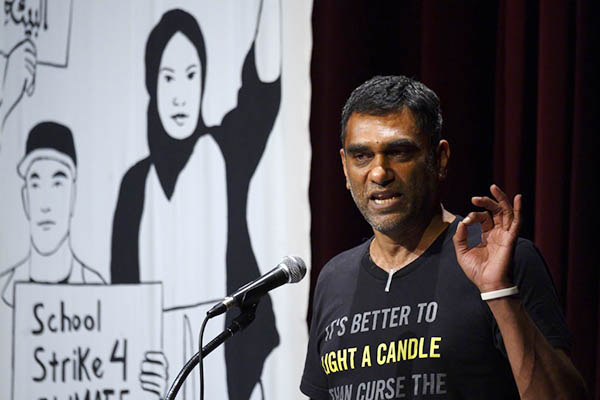 The head of Amnesty International warned on Monday that a U.S. military intervention in response to the attack on Saudi oil facilities blamed on Iran would only aggravate suffering in the Middle East.

The rights group’s secretary general, Kumi Naidoo, said the world instead should redouble efforts to end the devastating violence in Yemen, where a Saudi-led air campaign has been striking Iranian-linked Houthi rebels.

“We need to stop the bleeding right now, and any talk of military intervention right now will only exacerbate a bad situation,” Naidoo told AFP in an interview in Washington. He warned of the lessons of Iraq, where the 2003 U.S. invasion that cited intelligence findings “created the catastrophe we have, not just in Iraq but in neighboring countries.”

“Certain political leaders could for opportunistic reasons choose to go to war because it might help them electorally,” he said. But he added: “I don’t make any distinction about countries. I think far too many countries are comfortable with beating the drums of war at the moment.”

The United States has blamed Iran for weekend strikes on Abqaiq, one of the world’s largest oil processing facilities, renewing talk that President Donald Trump could order military retaliation. The Houthi rebels claimed responsibility for the strike, but Secretary of State Mike Pompeo said there was no evidence it originated in Yemen.

Saudi Arabia launched a multi-billion-dollar intervention in 2015 in Yemen, aggravating what the U.N. calls the world’s worst humanitarian crisis with tens of thousands of deaths. “The horrific levels of violence that people have been experiencing—as well as the bombings of hospitals, the destruction of water infrastructure and so on—is something that just should have been stopped with political will,” Naidoo said. “Sadly, it appears that some governments, if they are allied with the United States, like Saudi Arabia, they can get away with murder—literally murder.”

Trump has defied Congress with his robust support of Saudi Arabia both in the Yemen war and after last year’s killing of dissident writer Jamal Khashoggi in the kingdom’s Istanbul consulate. Defending the relationship, Trump has said that Saudi Arabia’s vast purchases of weapons from the United States benefited the U.S. economy.