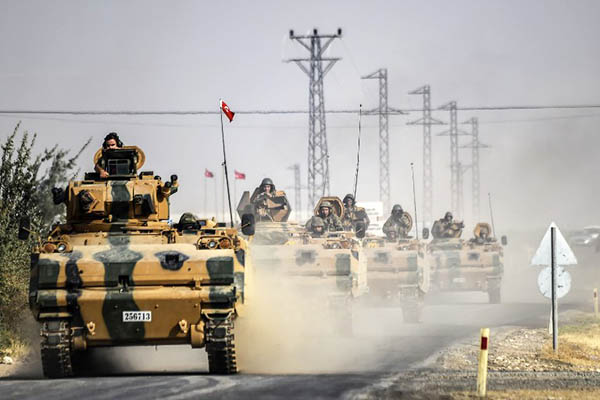 Ankara-backed rebels say they have seized full control of Jarabulus, held by extremist group since 2014.

U.S. military aircraft on Wednesday pounded the northern Syrian border town of Jarabulus as part of a Turkish-led effort to push Islamic State group jihadists from the key crossing point.

Speaking on condition of anonymity to discuss ongoing operations, a U.S. defense official said the U.S.-led coalition against I.S. had deployed American A-10 “Warthog” ground-attack planes and F-16 fighters to hit jihadist targets. We “are currently conducting airstrikes in support of Turkish and vetted Syrian opposition operations against ISIL in Jarabulus,” the official said.

The planes would most likely have flown from Incirlik, a nearby Turkish air base that the coalition uses. By Wednesday evening in Syria, rebels said they had seized full control of Jarabulus, which had been held by I.S. since 2014 and was a key transit point for I.S. fighters flowing between Syria and Turkey.

A second U.S. defense official, also speaking on condition of anonymity, said some I.S. fighters appeared to be attempting to flee Jarabulus, and would be targeted from the air if they are confirmed to be jihadists.

Earlier Wednesday, a senior official traveling with U.S. Vice President Joe Biden, who arrived in Turkey for meetings with President Recep Tayyip Erdogan and Prime Minister Binali Yildirim, spoke to reporters about U.S. involvement in operations. The United States is “syncing up with them, our advisers are in the planning cell with them,” he said.

Biden is in Turkey in an effort to help improve relations strained by the country’s coup d’etat attempt last month.

Washington is also helping ensure Kurdish fighters further south do not provoke a conflict with Turkish forces by moving north toward Jarabulus, the official said.

The United States has made it clear to the Syrian Democratic Forces, a U.S.-backed Kurdish and Arab alliance, that “we don’t and won’t support them going north, and they can’t without our air cover, so we’ve put a lid on them moving north,” the official traveling with Biden said. “I think we’ve put a lid on the Turks’ biggest concern [which] gives us breathing space to make sure the Jarabulus operation is done the right way.”

The Turkish operation—named “Euphrates Shield”—began early Wednesday with Turkish artillery pounding dozens of I.S. group targets around Jarabulus, according to the Turkish prime minister’s office. “The United States encourages all parties to focus their efforts on ISIL, and we are working with our Turkish allies and our partnered forces in Syria to ensure that ISIL remains everyone’s focus,” Rankine-Galloway said.

Turkish tanks and special forces accompanied by pro-Ankara Syrian rebels then rolled across the border in an unprecedented operation to drive the I.S. group out of the town from which it has fired rockets into Turkey. Jarabulus had a population of 30,000, half of them displaced from other parts of war-torn Syria, according to Fabrice Balanche, a French expert on the political geography of Syria.