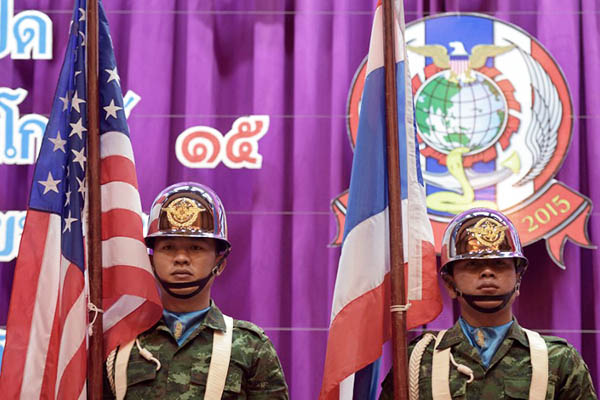 Perturbed by Thailand’s coup, the United States has scaled back a showpiece joint military exercise with its Southeast Asian ally, but analysts say that with China circling for influence, Washington will not push the kingdom’s generals too far.

Famed for its jungle bonding sessions where U.S. and Thai soldiers down snake blood, the annual “Cobra Gold” event is the crown jewel of Thailand’s decades-long strategic alliance with the U.S. But this year’s edition, which started on Monday, has been slimmed down, as Washington recalibrates the level of military support it is willing to show for a country under junta rule—and martial law—since last May.

In tweets following the opening ceremony, U.S. charge d’affaires W. Patrick Murphy said the exercise had been “modified” in response to a “challenging” period, urging a return to democracy so the “full potential of relations” could be restored.

For months following the junta’s takeover, which Washington strongly criticized at the time, there were questions over whether Cobra Gold would even go ahead. Some U.S. Congress members suggested it should either be moved to northern Australia or cancelled altogether. But while Washington wants to see one of its strongest Asian allies return to democratic rule, it has no desire to risk its relationship with Thailand, especially as the world’s most powerful military pursues its much-vaunted “pivot” to Asia to challenge a rising China.

“This is an intimate security relationship which goes back decades and has been strengthened by multiple challenges,” said Anthony Davis, a Bangkok-based military expert with IHS-Jane’s, citing conflict in Korea, Vietnam, Laos as well as Thailand’s own battle with communist insurgency. “You don’t throw that away in a fit of pique.”

Nonetheless the relationship between the two old allies is currently far from cordial. Last month junta chief Prayut Chan-O-Cha reacted with barely concealed fury when a visiting senior U.S. diplomat made guarded criticisms of the regime.

Gregory Poling, an expert on Southeast Asian militaries at the Center for Strategic and International Studies, says Thailand’s coup has thrust the U.S. onto the horns of a dilemma. “The U.S. government cannot endorse a military junta,” he said. “But Thailand is also a treaty ally and one of the deepest and most abiding relationships the United States has in the region.”

In the past the exercise has often included a live-fire amphibious assault, which has also been scrapped, a spokeswoman at the U.S. embassy told AFP. It is “a noticeable difference from past versions,” she said, adding that there would, however, still be some live-fire training.

At the heart of Washington’s careful balancing act lies China, which has publicly wooed Thailand since the coup and is looking for opportunities to push back against America’s Asia pivot. In December, Chinese Premier Li Keqiang met Prayut to sign a multi-billion-dollar railway construction agreement in a visit widely interpreted as an endorsement by Beijing of Thailand’s new military rulers.

And last week, China’s defense minister held talks with Prayut in Bangkok to harden their military cooperation, in an expanding relationship, which observers say could be used as a bargaining chip with Washington.

Chinese troops are also taking part in Cobra Gold, alongside more than 20 other nations, in only their second “boots on the ground” presence, as opposed to observer status. Analysts say however despite U.S. criticism and the diplomatic flirtation, there is little chance Bangkok would turn its back on its oldest ally and realign with Beijing.

“The Thais are past masters at the art of diplomacy and they have no desire, in my estimation, to jump into bed with the Chinese dragon,” said Davis. “We’re talking about a rebalancing, an important, perhaps even a watershed recalibration of the relationship with the U.S. But the Thais have got much too much to lose by a total realignment towards China. It’s inconceivable.”