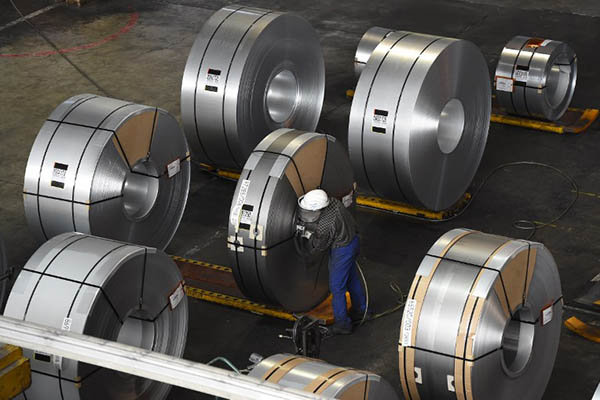 The United States said on Thursday it will impose stiff tariffs on steel and aluminum imports from the European Union, Canada, Mexico, reviving fears of a trade war with angry allies and trading partners.

The announcement by Commerce Secretary Wilbur Ross immediately drew retaliatory action by Mexico, Canada and threats of the same by the E.U., while France called the tariffs “illegal.”

The U.S. action, which took effect at midnight, cast a long shadow over a meeting of finance ministers from the Group of Seven top world economies, which opened in Canada. International Monetary Fund chief Christine Lagarde warned the G7 officials of an erosion of trust amid the trade frictions. And she said the action will “distort and damage and disrupt supply chains which have been established now for decades.”

The White House, however, said the tariffs first imposed in March—25 percent duties on steel and 10 percent on aluminum—have had “major, positive effects on steel and aluminum workers and jobs.” And the administration’s actions “underscore its commitment to good-faith negotiations with our allies to enhance our national security while supporting American workers.”

But instead of dialogue, the announcement sparked immediate angry reactions from key allies. French President Emmanuel Macron who has enjoyed a warm relationship with Trump, “deplored” the U.S. move declaring it “illegal.” And Canada Prime Minister Justin Trudeau said the U.S. tariffs were “totally unacceptable,” and “an affront to the long standing security partnership between Canada and the United States.”

Trudeau vowed to challenge the action in the World Trade Organization and the North American Free Trade Agreement.

Ross said talks with the E.U. failed to convince Washington that it should continue exempting the trading bloc from the tariffs.

Washington also is removing exemptions for Mexico and Canada because negotiations to revise the 24-year-old NAFTA are “taking longer than we had hoped” and there is no “precise date” for concluding them, Ross said

In response, Canada announced Can$16.6 billion (US$12.8 billion) in retaliatory duties on U.S. goods, including potentially on beef, coffee, candies, plywood and surprisingly, maple syrup, as well as steel and aluminum.

E.U. chief Jean-Claude Juncker said the 28-nation bloc “will announce in the next coming hours counter-balancing measures” in response to the U.S. action. Brussels previously threatened to slap tariffs on U.S. products including bourbon, motorcycles and blue jeans, as well as other products.

Meanwhile, South Korea negotiated a steel quota, while Argentina, Australia and Brazil have arranged for “limitations on the volume they can ship to the U.S. in lieu of tariffs,” Ross said.

Despite weeks of talks with his E.U. counterparts, Ross said the United States was not willing to meet the E.U. demand to be “exempted permanently and unconditionally from these tariffs.”

“We had discussions with the European Commission and while we made some progress, they also did not get to the point where it was warranted either to continue the temporary exemption or have a permanent exemption,” Ross said.

Ross downplayed the threats of retaliation, and said talks can continue even amid the dispute to try to find a solution. And he said Trump has the authority to alter the tariffs or impose quotas or “do anything he wishes at any point”—allowing “potential flexibility” to resolve the issue.

U.S. Treasury Secretary Steven Mnuchin is expected to hear a lot from his counterparts at the G7 meeting Friday and Saturday. Trump imposed the steel and aluminum tariffs using a national security justification, which Ross said encompasses a broad array of economic issues—a premise derided by U.S. allies.

Ross said Trump was living up to his campaign promises. “The overwhelming objective is to level the playing field,” Ross said, adding that U.S. goals include getting rid of trade barriers, protecting intellectual property and stopping forced technology transfers.

Protecting technology is the key issue in the U.S. trade dispute with China, which the White House said would face 25 percent tariffs on $50 billion in goods.

Ross said he plans to travel to Beijing on Friday for further talks aimed at finding a solution to the trade friction. The administration had said the China tariffs were on hold, but then reversed course this week and announced it was planning to go ahead with them after all.

The U.S. action prompted an outcry from Trump’s own Republican party, although metal industry groups expressed support. “When it comes to unfairly traded steel and aluminum, Mexico, Canada, and Europe are not the problem—China is,” said Kevin Brady, chairman of the House Ways and Means Committee.

Republican Senator Ben Sasse was more blunt: “This is dumb.”

Global stock markets were not happy with the prospect of a trade war, with shares falling in London, Paris and Frankfurt, while Wall Street retreated from Wednesday’s short-lived recovery. The benchmark Dow Jones Industrial Average dropped 1.0 percent.