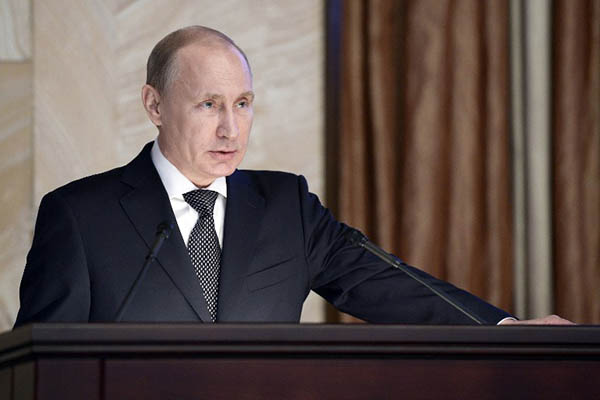 The United States on Monday said it will impose sanctions on Russia today (Tuesday) after coordinating with allies its response to President Vladimir Putin’s decision to deploy Russian troops to two separatist areas of Ukraine.

“We plan to announce new sanctions on Russia tomorrow in response to Moscow’s decisions and actions today. We are coordinating with allies and partners on that announcement,” a White House spokesperson told AFP on Monday. Earlier, President Joe Biden had imposed limited sanctions on the two Russian-backed areas in eastern Ukraine—Donetsk and Lukansk—that had been recognized as independent states by Putin.

The Russian president’s troops’ deployment—which the Kremlin has described as “peacekeeping” forces—has been condemned as a violation of Ukraine’s territorial integrity by a majority of the global community. Observers say the decision to designate the deployment as “peacekeeping” rather than an actual invasion is intended to prevent harsher Western sanctions against Moscow.

“Russian troops moving into Donbass would not be a new step,” the White House official told journalists during a briefing. “We’ll continue to pursue diplomacy until the tanks roll.”

On Monday night, Putin announced that he was recognizing the separatist Donetsk and Luhansk enclaves as “independent” and accused the West of trying to turn Ukraine into an anti-Russian stronghold. He said he was deploying Russian military troops as “peacekeepers” in the region. The move is being widely seen as a powder keg, with the potential to escalate into a war between Moscow and the Western-backed Ukrainian government.

“As for those who seized and hold power in Kyiv, we demand an immediate end to their military operations,” the Russian president said in a televised address. “Otherwise, all responsibility for the possible continuation of bloodshed will be fully on the conscience of the regime in power in Ukraine,” he said, adding it was now necessary to “to immediately recognize the independence” of the two regions.

Immediately after the speech, state television showed him signing mutual aid agreements with rebel leaders in the Kremlin.

In response, the U.S. has warned that heavy sanctions on Russia could be imposed at any time. Secretary of State Antony Blinken claimed the decision showed Putin had no interest in diplomacy. In a statement, he said that recognizing the independence of Donetsk and Luhansk “directly contradicts Russia’s claimed commitment to diplomacy, and is a clear attack on Ukraine’s sovereignty.”

U.K. Prime Minister Boris Johnson has termed the move a “a flagrant violation of the sovereignty and integrity of the Ukraine.” Similarly, European Union chiefs Ursula von der Leyen and Charles Michel promised the bloc would “react with sanctions against those involved in this illegal act.”

In a tweet, French President Emmanuel Macron said Russia was “violating its commitments and undermining Ukraine’s sovereignty” and called for an emergency meeting of the U.N. Security Council and European sanctions.

Japan, early on Tuesday, said it would support the U.S. in imposing sanctions on Russia if President Vladimir Putin ordered an invasion of Ukraine. China, meanwhile, called for restraint by “all sides” to avoid further escalation in the Ukraine crisis, and advised seeking a diplomatic solution through an emergency United Nations Security Council meeting. “All parties concerned must exercise restraint and avoid any action that may fuel tensions. We welcome and encourage every effort for a diplomatic solution,” said Zhang Jun, China´s ambassador to the U.N.

In a television address, Ukraine President Volodymyr Zelenskyy stressed that Ukraine was within its internationally recognized borders and would remain so. “Despite any statements and actions of the Russian Federation, we remain calm and confident,” he said, adding that Kyiv saw Putin’s announcement and troops’ deployment as a “violation of the sovereignty and territorial integrity of our state.”

He added: “Recognition of the independence of the occupied areas of Donetsk and Luhansk regions mean Russia’s unilateral withdrawal from the Minsk agreements, and them ignoring decisions within Normandy format.”