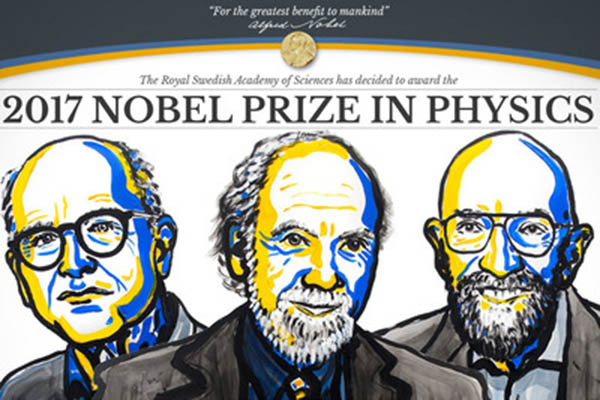 U.S. astrophysicists Barry Barish, Kip Thorne and Rainer Weiss were awarded the Nobel Physics Prize on Tuesday for the discovery of gravitational waves, offering a sneak peek at the universe’s very beginnings.

Predicted by Albert Einstein a century ago as part of his theory of general relativity, gravitational waves are “ripples” in space-time—the theoretical fabric of the cosmos. They are the aftermath of violent galactic events such as colliding black holes or imploding massive stars, and can reveal events that took place billions of years ago.

The first detection of gravitational waves happened in September 2015 at the U.S.-based Laser Interferometer Gravitational-wave Observatory (LIGO), where the three Nobel laureates worked. Announced in February 2016 to great excitement in the scientific community, the discovery was hailed as the historic culmination of decades of research.

“Their discovery shook the world,” said Goran Hansson, the head of the Swedish Royal Academy of Sciences, which selects the Nobel laureates. “I had hoped it would go to the team, it didn’t, it went to us,” Thorne said after learning of the prize. “We had been expecting it, so I thought I would be blasé but in fact I was overwhelmed.”

In 1984, Thorne, now 77, and Weiss, 85, co-created LIGO at the prestigious California Institute of Technology, which has taken home 18 Nobels since the prizes were first awarded in 1901. Barish, 81, joined the project in 1994 and helped bring it to completion. LIGO is now a collaboration between more than 1,000 researchers from 20 countries.

The 2015 observation was of two black holes smashing into each other some 1.3 billion light-years away. “Although the signal was extremely weak when it reached Earth, it is already promising a revolution in astrophysics,” the Nobel academy said. “Gravitational waves are an entirely new way of following the most violent events in space and testing the limits of our knowledge.”

Gravitational waves are minuscule and near-undetectable because they interact very weakly with matter and travel through the universe at the speed of light unimpeded. The ripples emitted by a pair of merging black holes, for example, would stretch a one-million-kilometer ruler on Earth by less than the size of an atom.

Since 2015, the enigmatic ripples have been detected three more times: twice by LIGO and once by the Virgo detector at the European Gravitational Observatory (EGO) in Cascina, Italy. “Einstein was convinced it would never be possible to measure them,” the jury said. “The LIGO project’s achievement was using a pair of gigantic laser interferometers to measure a change thousands of times smaller than an atomic nucleus, as the gravitational wave passed the Earth.”

Black holes emit no light, and can be observed only through gravitational waves that occur when they collide and violently merge—offering scientists a means of studying them.

“If we could hear all the waves and not only the strongest ones, the entire universe would be full of music, like birds chirping in a forest, with a louder tone here and a quieter one there,” the academy said.

Weiss was awarded half the prize of nine million Swedish kronor (about $1.1 million or 940,000 euros), while Barish and Thorne shared the rest. “It’s really wonderful. I view this more as a thing that recognizes the work of about a thousand people,” Weiss said shortly after the announcement. “It took us a long time… two months… to convince ourselves that we had seen [something] that came from the outside and was truly a gravitational wave.”

Barish, who went to his laptop to see who won the Nobel when he didn’t get a call, suddenly heard his cellphone ringing—wondering how Stockholm got that number. “My feelings at the time were… a complicated mixture between being thrilled and being humbled,” he said.

Caroline Crawford, an astronomer at Cambridge University, told AFP the discovery “holds the potential for a completely new way of observing parts of the cosmos, the parts… completely obscured from our view.”