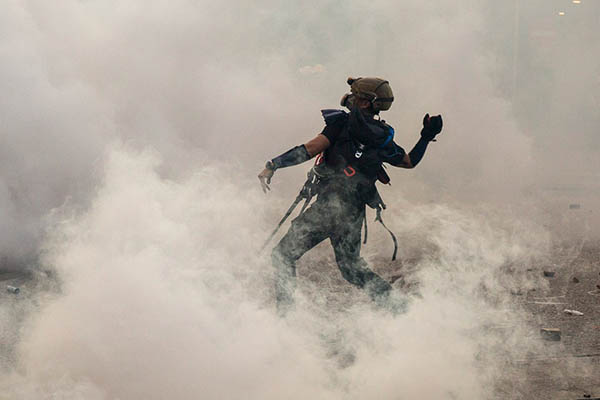 A protester throws a brick back at police after they fired tear gas during a general strike in Hong Kong. Isaac Lawrence—AFP

The financial hub has been rocked by two months of unrest, initially triggered by opposition to a planned law that would have allowed extraditions to mainland China. The demonstrations have evolved into a wider movement for democratic reform that has seriously disrupted the city with sometimes violent protests.

On Thursday, the U.S. State Department warned citizens to “exercise increased caution,” upgrading its previous advice to “exercise normal precautions.” The warning notes that demonstrations in the city have been mostly peaceful “but some have turned confrontational or resulted in violent clashes.”

“These demonstrations, which can take place with little or no notice, are likely to continue,” the advice adds.

The U.S. warning comes after countries including Australia, Britain, Ireland, Singapore and Japan issued heightened travel warnings for Hong Kong. Images of clashes between masked protesters and police firing tear gas in Hong Kong’s streets have made global headlines, and on Tuesday China gave its sternest warning yet to the pro-democracy demonstrators.

But the protests are expected to continue, with demonstrators planning three days of rallies at the city’s airport from Friday afternoon.

On Monday, a general strike called by protesters saw more than 160 flights cancelled and transport in the city paralyzed. Hong Kong’s flagship carrier Cathay Pacific did not immediately respond to a request for comment on the planned airport rallies. A statement on the Hong Kong International Airport website said the protests were not expected to disrupt operations.

“Airport Authority Hong Kong is aware that there have been calls posted online for a public assembly at the airport on 9-11 August. The airport will operate normally,” it said. It urged passengers to “allow sufficient time for traveling to the airport” and to check flight status information before coming to the airport.

On July 26, protesters gathered at the airport for a demonstration, sharing their message with tourists arriving at the busy transport hub. The protest was peaceful and did not interrupt flights. But Cathay Pacific has seen bookings drop as the crisis continues in Hong Kong, chairman John Slosar warned Wednesday. “The protests in Hong Kong reduced inbound passenger traffic in July and are adversely impacting forward bookings,” he said.