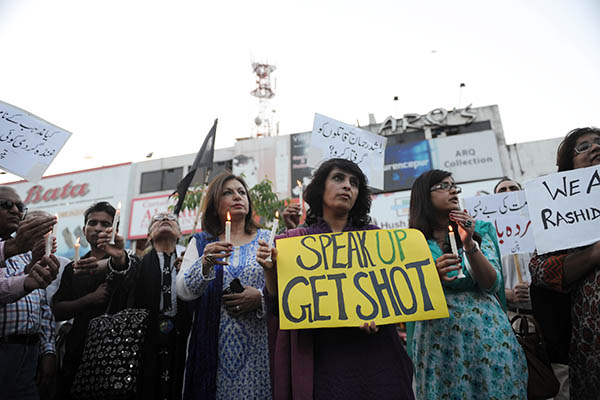 The United States Friday called on Pakistan to investigate the killing of a lawyer shot dead for defending a university lecturer accused of blasphemy under strict laws against defaming Islam.

“We were deeply saddened by the murder of Rashid Rehman, an attorney and human rights defender in Pakistan,” State Department spokeswoman Jen Psaki told reporters. “We encourage Pakistani authorities, as we have in similar cases in Pakistan and around the world, to swiftly investigate this crime and bring to justice those responsible.”

Psaki spoke as Deputy Secretary of State Bill Burns was visiting Pakistan Friday at what he said was a “moment of opportunity” in U.S.-Pakistan ties. Burns met with Prime Minister Nawaz Sharif as well as other top ministers and advisers and Gen. Raheel Sharif, the head of the nation’s army.

“After some difficult years, our relationship is on a positive trajectory—a trajectory we hope to not only maintain, but accelerate,” Burns said in a statement. Washington supported the prime minister’s bid “to reestablish authority over all Pakistani territory in whatever way Pakistan deems appropriate.” And the U.S. wanted to “especially urge him to sustain pressure on militant groups, deny them a safe-haven, and prevent cross-border attacks,” Burns said. “Militancy continues to threaten Pakistan’s revival. Few countries have paid a heavier price than Pakistan in the fight against extremism.”

Ties have improved markedly since almost collapsing in 2011 amid a series of crises including the U.S. raid in Pakistan that killed Al Qaeda chief Osama bin Laden. The U.S. has also reduced the number of drone attacks on the unruly border areas between Pakistan and Afghanistan where Al Qaeda and Taliban insurgents are believed to be hiding. Islamabad has publicly denounced drone attacks as a violation of sovereignty.

“Countering cross-border militancy and shutting down safe havens is critical not only for Pakistan’s long-term peace and prosperity but also for positive relations between Pakistan and all its neighbors, including Afghanistan,” Burns added.