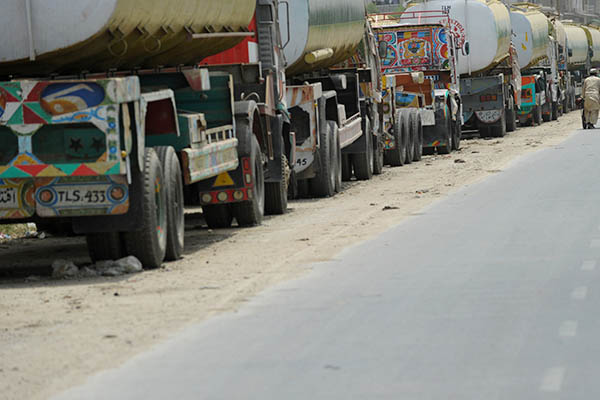 Pentagon officials are holding talks in Afghanistan on the withdrawal of U.S. military equipment from the country, officials said Friday, as Washington hopes to lower the cost of the massive operation.

American forces have to fly out large amounts of gear at great expense but defense officials would like to move more vehicles and equipment over cheaper land routes through Pakistan, officials said.

With the U.S. military’s drawdown underway and set to finish by the end of 2014, about 20 percent of the cargo is currently being withdrawn through the overland route across the Pakistan border. But officials say they would prefer to have 60 percent of all materiel move over land instead of by air.

Deputy Defense Secretary Ash Carter and other senior officials arrived in Kabul earlier Friday and the equipment withdrawal, or “retrograde,” will feature prominently in their discussions, officials said. Carter will seek to “assess the continued progress on retrograde efforts,” a defense official said.

The Afghan government shut the border earlier this year in a dispute over what the U.S. military should pay for withdrawing its gear, with Kabul insisting the Americans owed up to $70 million in customs fines.

Washington has maintained the military equipment came into the country legally and refused to pay the fees. Afghan authorities eventually reopened the border.

Asked about the dispute, a senior Pentagon official told reporters: “We think we’ve resolved that.”

The official, who spoke on condition of anonymity, said the Pentagon was pleased with the pace of movement on the Pakistan route since April and hoped that the share of cargo moving on the supply line would expand soon from 20 to 30 percent.

Unlike the American departure from Iraq, the withdrawal of U.S. military equipment from Afghanistan represents a daunting logistical problem in a landlocked nation with unreliable roads and mountainous terrain.

By 2015, the United States must remove about 24,000 vehicles and the equivalent of roughly 20,000 shipping containers.

Other equipment deemed not to be worth taking out is being donated to the Afghan government, passed on to NATO allies willing to cover the transport costs, or destroyed.

The cost of the effort is estimated to range from $5 billion to $7 billion, but how much of the gear is ferried out by land will affect the final price tag, officials said.

Weapons and other sensitive items have to be ferried by air, but the percentage moving over land could increase if “administrative” procedures were cleared up on the Afghan side of the border, officials said.

The United States has 55,000 troops in Afghanistan and plans to withdraw the bulk of combat forces by the end of 2014. U.S. officials are negotiating an agreement with Kabul to keep a smaller force in place beyond 2014.