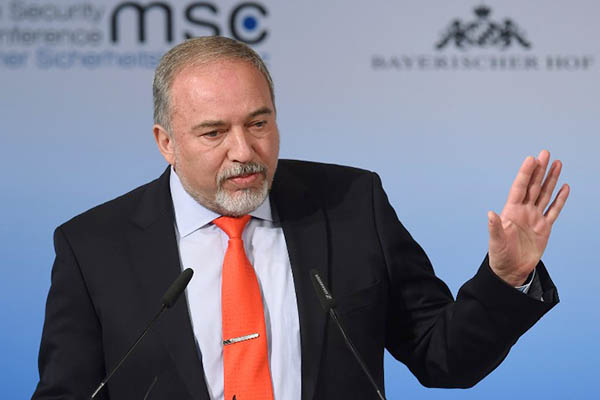 Minister says Washington has warned such a move would lead to ‘immediate crisis.’

Israeli Defense Minister Avigdor Lieberman said on Monday that the United States has warned that annexing the West Bank would lead to an “immediate crisis” with President Donald Trump’s administration.

Lieberman, speaking before his first trip to Washington since Trump took office, sought to push back against those in Prime Minister Benjamin Netanyahu’s coalition calling for a declaration of Israeli sovereignty over all or part of the occupied territory. He said annexation would provoke a crisis with Washington and result in steep costs for the Israeli government since it would be required to provide services to Palestinians in the West Bank.

“We have received a very clear, direct message from the United States stating that the application of Israeli law in Judea and Samaria [the West Bank] would provoke an immediate crisis with the new administration,” Lieberman said before a parliamentary committee. His office said he would leave Israel on Monday night for Washington, where he would meet Vice President Mike Pence, Defense Secretary Jim Mattis, Secretary of State Rex Tillerson “and hold other meetings.”

Some 2.6 million Palestinians live in the West Bank, which Israel occupied in 1967. The latest call for annexation came on Sunday, when lawmaker Miki Zohar from Netanyahu’s Likud party said in a television interview that “the two-state solution is dead.”

Zohar advocated a single state, but said that Palestinians in the West Bank should not be allowed to vote in Israeli parliamentary elections. Others have made similar calls, including Education Minister Naftali Bennett who heads the religious nationalist Jewish Home party.

Bennett advocates annexing most of the West Bank, and has said he hopes support from Trump’s presidency will spell the end of the idea of a Palestinian state.

In his comments on Monday, Lieberman also laid out an economic argument against annexation, saying Israel immediately “will be required to spend 20 billion shekels ($5.4 billion/5.1 billion euros)” on various social services.

The defense minister, who heads the rightwing Yisrael Beitenu party, advocates a two-state solution based on territorial and population exchanges. Netanyahu says he still supports a two-state solution, though he has also pushed for settlement expansion in the West Bank.

He has found himself seeking to hold together his governing coalition—seen as the most rightwing in Israeli history—while managing international relations, including with the United States.

The U.S. is Israel’s most important ally, providing it with more than $3 billion in defense aid annually. Some Israeli politicians have pushed for the immediate annexation of Maale Adumim, an Israeli settlement of some 37,000 people in a strategic location east of Jerusalem.

However, a bill to annex the settlement has been postponed by the cabinet to an unclear date.