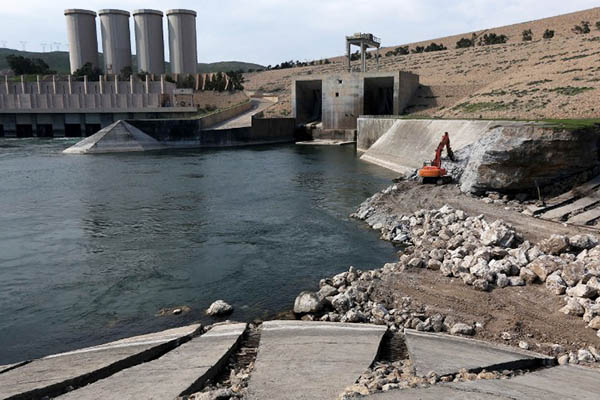 Up to 1.5 million people are at risk if the Iraq Dam, which is already a flawed structure, collapses.

The United States on Wednesday urged governments to quickly mobilize to prevent a “humanitarian catastrophe of epic proportions” from the possible collapse of Iraq’s Mosul dam.

Concern has grown in recent months over a possible breach in Iraq’s largest dam, which would unleash a wave as high as 14 meters, devastating Mosul and flooding much of the capital Baghdad, with up to 1.5 million people at grave risk.

After hosting a meeting with Iraq’s U.N. Ambassador Mohamed Ali Alhakim to hear briefings on the potential disaster, U.S. Ambassador Samantha Power called on all U.N. member states to take immediate steps. “It is crucial that all U.N. member states quickly get informed about the magnitude of the problem and the importance of readiness to prevent a humanitarian catastrophe of epic proportions,” said Power.

The ambassador described briefings by technical experts, engineers and representatives from U.N. aid and development agencies as “chilling.”

The dam in northern Iraq was built on an unstable foundation that continuously erodes, and a lapse in required maintenance after the Islamic State jihadist group briefly seized it in 2014 weakened the already flawed structure. “In the event of a breach, there is the potential in some places for a flood wave up to 14 meters high that could sweep up everything in its path, including people, cars, unexploded ordnance, waste and other hazardous material, further endangering massive population centers that lie in the flood path,” said Power in a statement released by the U.S. mission.

Power said repair work must be undertaken as soon as possible and Iraqis must be well informed about the best evacuation routes.

Italian firm Trevi has been selected to carry out crucial repair work on the dam, which is currently protected by Kurdish peshmerga forces. A U.N. aid appeal for Iraq has received only eight percent of the $861 million requested, compounding concerns about badly needed assistance.

West Now Has More Leverage in Afghanistan than...