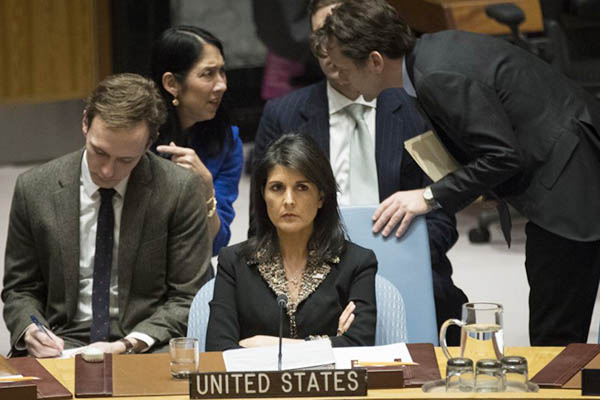 The United States is seeking to reduce its funding for the United Nations, U.S. Ambassador Nikki Haley said on Friday, stressing that multilateralism had, at times, been a “bad deal” for Americans.

By far the U.N.’s largest financial backer, the United States provides for 20 percent of the operating budget, 25 percent of the separate peacekeeping costs and contributes major funding to U.N. agencies.

Haley told a Security Council debate on defending multilateralism that U.S. taxpayers were questioning whether the financial contribution to the United Nations was worth it. “There are times when we are tempted to believe that multilateralism has been a bad deal for the United States, that we could be more effective advancing our principles and interests on our own,” said Haley. “And there are times when that conclusion is correct.”

Haley, who is set to leave her post at the end of the year, said U.S. “aid dollars shouldn’t be on auto-pilot” and stressed the need to consider ways of “re-balancing how we finance the United Nations and our peacekeeping operations.”

The U.N.’s 193 member-states are beginning negotiations on the peacekeeping budget, which last year was cut under U.S. pressure by $600 million to a total of $6.7 billion.

Haley said that at 25 percent, the U.S. share of the peacekeeping budget was “disproportionate,” and called for new burden sharing in negotiations set to wrap up in December. “This is not just a question of fairness. It is a question of the ongoing success of multilateralism itself,” she warned.

Peacekeeping financing is determined by a complicated formula that takes into account a country’s wealth, it’s standing as a permanent Security Council member and other factors.

China’s strong economy has meant that its share of the peacekeeping budget has grown significantly to reach 15 percent, but other permanent council members, such as Russia, pay less than five percent.

Diplomats expect negotiations on a new formula to share peacekeeping costs to be arduous. The top five contributors to U.N. peacekeeping are the United States, China, Japan, Germany and France.

Haley praised peacekeeping operations and sanctions imposed on North Korea as examples of success at the United Nations. She pointed to the General Assembly’s failure to support a U.S. bid to criticize Cuba’s human rights record and the election of authoritarian governments to the Human Rights Council as a “failure of multilateralism.”