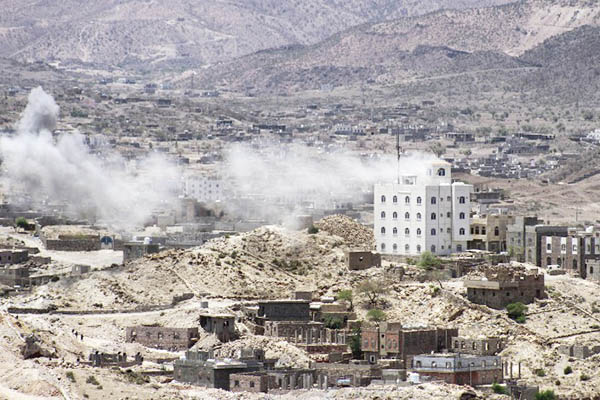 Secretary of State John Kerry says Washington is attempting to secure negotiated process through the U.N.

The United States said Saturday it was working to find a solution for Yemen’s crisis as the U.N. urged a truce, warning the country was on the verge of collapse.

More than six weeks of Saudi-led airstrikes targeting Shia rebels in Yemen and ground fighting has killed hundreds of people and forced hundreds of thousands to flee the impoverished country. U.N. chief Ban Ki-moon urged a humanitarian pause in the conflict as embattled aid agencies say they desperately need supplies, including fuel to run infrastructure such as hospitals.

“The services still available in the country in terms of health, water, food are quickly disappearing because fuel is no longer being brought into the country,” said the U.N.’s Johannes van der Klaauw. Speaking to AFP in Djibouti, the United Nations humanitarian coordinator for Yemen said a “humanitarian pause” demanded by Ban is needed “at least for a couple of days” to help bring in fuel.

“Without fuel hospitals can’t work, ambulances can’t go out. You can’t have the water system working because water has to be pumped. The telecommunication network risks shutting down,” he said. “This all extremely preoccupying. If something is not done in the next few days in terms of bringing fuel and food into the country, Yemen is going to come to a complete standstill.”

U.S. Secretary of State John Kerry told reporters in Sri Lanka it was not inevitable that Yemen would become a failed state, stressing however that Washington was working “very hard” to find a solution. “I will not say yet that the verdict is in on what Yemen is going to be because we are trying very hard, working with the U.N., working with our friends in the region,” he said. “We are working hard to secure a negotiated process through the U.N. which will bring the parties together, Yemenites to negotiate the future of Yemen,” he said.

Kerry was speaking a day after the U.N. Security Council failed to back a Russian appeal for an immediate ceasefire or humanitarian pauses in Yemen.

Diplomats said a draft statement submitted by Russia to a closed-door session of the 15-member council was not rejected out of hand on Friday, but that council members needed time to consider the wording. “There was a strong degree of council agreement on the desperate humanitarian situation in Yemen and need to return to political talks,” one diplomat said.

The Saudi-led coalition launched the air war on March 26 against Iran-backed Houthi rebels who overran much of the country, forcing President Abedrabbo Mansour Hadi to flee to Riyadh. Iran, which denies arming the insurgents, has denounced the campaign of daily airstrikes.

“The fact that Saudi Arabia is focused on the war against Yemen only benefits the Zionist regime and terrorist groups,” Iran’s Deputy Foreign Minister Hossein Amir-Abdollahian said on Saturday. He accused Riyadh of “adventurist actions” and said Iran considers Yemen’s security to be like its own.

Shia-majority Iran and the Sunni-ruled Gulf monarchies are also at odds over U.N. efforts to resume peace negotiations for Yemen.

Saudi Arabia and its coalition partners say the talks must be held in Riyadh, while Iran demands a neutral venue that could also accommodate its Houthi allies.

Kerry said he hoped a solution would be found soon. “We are having discussions over the course of every day right now in order to push towards this and our hope is that the U.N. process may be able [to] actually take hold before too long,” he said.

However, fighting raged overnight in southern Yemen as Saudi-led warplanes struck rebel positions, medics and military sources said. In second city Aden, dozens of people were killed when a missile hit a rebel-held hospital, while in Yemen’s third largest city Taez, 35 rebels were killed and 62 wounded in an airstrike.