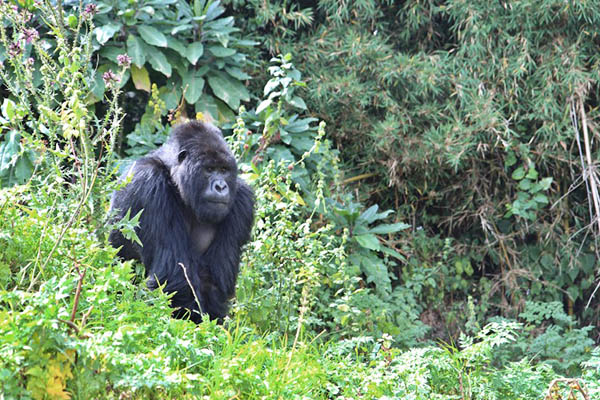 Authorities say tranquilizing the animal was not an option, as he could have acted aggressively before sedative kicked in.

The director of an Ohio zoo on Monday defended the killing of a critically endangered gorilla as it dragged a young boy who had fallen into its enclosure in a horrifying incident captured on video.

Harambe, a 17-year-old male western lowland silverback gorilla, was shot after the four-year-old crawled through a barrier and tumbled 15 feet into the Cincinnati Zoo enclosure on Saturday.

Video footage shows the creature yanking the boy through a water-filled moat while onlookers scream. At one point, the huge animal stops and appears to hold the child’s hand before pulling him out of view.

Zoo officials said they were heartbroken over the loss of Harambe, but had to make a rapid choice on how to rescue the boy. “We did not take the shooting lightly. But that child’s life was in danger and people who question that, or are Monday morning quarterbacks or second guessers, don’t understand that you can’t take a risk with a silverback gorilla,” zoo director Thane Maynard told reporters.

The huge gorilla was about six times stronger than a man, Maynard added, and was confused and disoriented. “This is an animal [that] with one hand, I have seen take a coconut and crush it,” he said.

The zoo said tranquilizing the animal was not an option because a dart could have startled the already-agitated creature, causing it to act aggressively before the sedative kicked in.

While generally acknowledging that zookeepers had few options, critics slammed the zoo and the child’s parents. “The enclosure should have been surrounded by a secondary barrier to prevent this,” People for the Ethical Treatment of Animals wrote on Twitter. “This tragedy is exactly why PETA urges families to stay away from any facility that displays animals as sideshows for humans to gawk at.”

Maynard said the barrier met all industry standards but the zoo would nonetheless review all of its enclosures.

The boy’s name was not released, but his family issued a statement to U.S. media offering their “heartfelt thanks” to the zoo. “We know that this was a very difficult decision for them, and that they are grieving the loss of their gorilla,” the statement said.

Still, angry animal lovers expressed outrage that the child had slipped into the enclosure. By Monday afternoon, at least 15 petitions had been created on the change.org website demanding justice for the slain animal.

The boy’s mother “did not give proper supervision. As a result, her child fell into a gorilla enclosure at the Cincinnati Zoo, resulting in the innocent living creature being euthanized,” one petitioner alleges.

Others called for a Harambe memorial to be built, and for people to boycott the zoo. Gorilla populations have plummeted in the face of relentless habitat destruction. Fewer than 175,000 remain in the wild.

Violence Against Children in Afghanistan Spikes