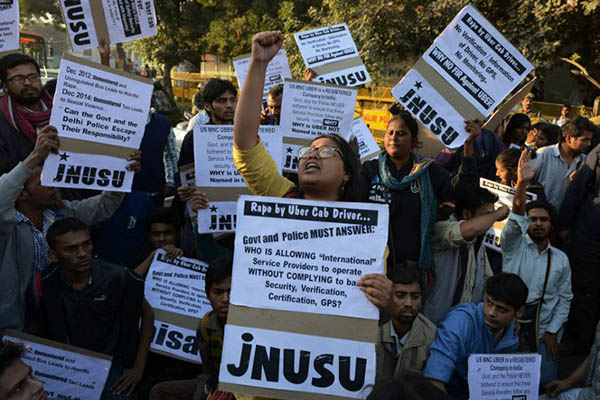 Police accuse Uber of failing to conduct mandatory background checks or install GPS in the cab.

Indian police arrested an Uber taxi driver late Sunday over the alleged rape of a 25-year-old passenger, an officer said, with the incident a blow to the company’s safety-conscious image.

Police said they tracked down the driver who had abandoned the taxi and fled to his native Uttar Pradesh state after attacking the woman on Friday night in a secluded part of the Indian capital. “The accused has been arrested from Mathura with the help of Uttar Pradesh police. He is being brought to Delhi,” deputy police commissioner of the northern part of New Delhi, Madhur Verma, told the Press Trust of India news agency.

Another officer, Delhi special commissioner Deepak Mishra, criticized Uber over the attack, saying early investigations showed GPS had not been installed in the taxi and mandatory police background checks were not conducted on the driver. “Our initial investigations have revealed the shortcomings of the private cab company which didn’t have GPS installed in its cabs and the staff wasn’t verified,” he said.

The incident comes as U.S.-based Uber, which emphasizes safety and high-end technology, is making inroads in the Indian market including by appealing to young urban professionals. Women in India, and Delhi in particular, are extremely safety-conscious after dark following a string of gang rapes that sparked global shock and anger.

The company said it was working with police to solve the “terrible crime” and had handed over details of the driver, car and trip, while stressing safety was “Uber’s highest priority.”

“We work with licensed driver-partners to provide a safe transportation option, with layers of safeguards such as driver and vehicle information, and ETA-sharing to ensure there is accountability and traceability of all trips that occur on the Uber platform.” In a later statement, it also said Uber “has a GPS trace and record of all trips.”

“This is an abhorrent crime. Our thoughts remain with the victim who has shown tremendous courage under the circumstances,” Uber said.

The incident comes just days before the second anniversary of the fatal gang-rape of a student in Delhi that unleashed outrage about attacks on women in India and inadequate efforts to keep them safe. The Dec. 16 attack on the 23-year-old on a moving bus sparked street protests and led to tougher laws against rapists and other sexual offenders.

In the latest incident, the female executive for a finance company dozed off in the taxi as she was returning home from dinner with friends, local media reported. The woman has told police she woke to find the taxi parked in a secluded place where the driver assaulted and raped her, before dumping her near her home in north Delhi.

Although the driver threatened to kill her if she reported the crime to police, the woman clicked a photo of the car’s number plate before alerting authorities.

Uber, found in 2009 and now present in more than 200 cities and in 45 countries, lets customers order and pay for taxis or private vehicles using a smartphone app.