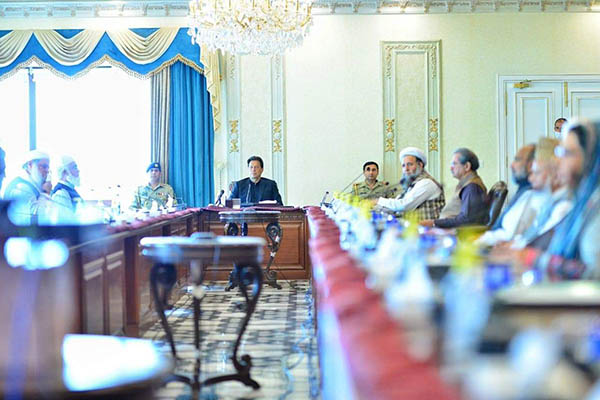 A delegation of senior clerics on Monday assured Prime Minister Imran Khan of their full support in implementing the precautionary measures advised by the government to curb the spread of novel coronavirus in Pakistan.

During a meeting in Islamabad, the religious scholars told the prime minister that his approach to the ongoing lockdowns in the country was “realistic,” and in accordance with “ground realities,” according to a statement issued by the Prime Minister’s Office.

In a subsequent press conference, Special Assistant to the P.M. on Information Firdous Ashiq Awan said ulema played a key role in Pakistan’s fight against COVID-19. She said the government had decided to allow mosques to remain open nationwide.

According to Awan, at the ulema’s request, the prime minister had directed police to release all clerics and worshippers who were arrested for violating movement restrictions on mosques earlier this month.

Awan said the prime minister had also instructed the PTV network to launch a televised program, similar to the TeleSchool, for madrassa students so their education would not suffer during lockdowns on educational institutions.

Religious Affairs Minister Noorul Haq Qadri, also present at the media briefing, said the government had decided to observe the coming Friday (April 24) as ‘Youm-e-Tauba’ to seek mercy from Allah in this difficult time. He said the P.M. had appealed to the ulema to obey the 20-point agreement devised last week to ensure COVID-19 does not spread through congregations in mosques.

She said the prime minister has also asked his economic advisers to seriously consider Mufti Taqi Usmani and Mufti Muneebur Rehman’s suggestion of Pakistan having an interest-free economy.

Awan said the P.M. had told the ulema COVID-19 was a big challenge that we have to deal with through the strength of our faith.

The meeting between P.M. Khan and the religious scholars followed a meeting last week between ulema and President Arif Alvi. During that meeting, the government issued a 20-point agreement that allowed mosques to reopen for congregational prayers during Ramzan, provided certain preventative measures were implemented to curb the spread of the disease.

The government was forced to take urgent action after prominent religious leaders last week announced that the movement restrictions imposed to contain COVID-19 would no longer apply to mosques.

Announcing the agreement on Saturday, President Alvi urged people to donate generously to mosques and madrassas during the month of Ramzan, claiming these funds were necessary for them to continue routine operations.