Ulema Should Educate Public About Evils of Corruption: Imran Khan 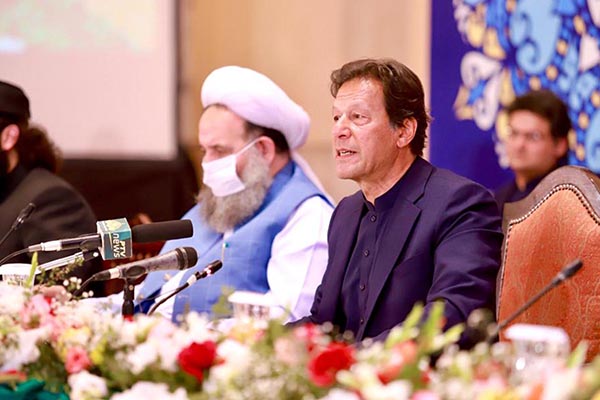 Pakistan’s ulema should educate the public on the evils of corruption and stress its unacceptability in society, Prime Minister Imran Khan said on Monday.

Addressing an Ulema and Mashaikh conference in Islamabad, he reiterated claims that he would never grant amnesty to “corrupt” former rulers, adding that it was regrettable that the entire nation had come to regard corruption as “not a sin.” He said social change was only possible when police or property officials would be afraid of “societal embarrassment” if they took bribes.

Urging the gathered religious scholars to play their role in spreading mass awareness about cleanliness, righteousness and national unity to make Pakistan a great nation, he said that they should use their sermons to bring about Pakistan’s “intellectual revolution.” Referring to his vision of the Riyasat-e-Madina, he said religious scholars had a pivotal role in helping Pakistan become an Islamic welfare state as envisioned by Quaid-e-Azam Muhammad Ali Jinnah.

The prime minister said that ensuring the basic rights of every citizen and the rule of law were the two main principles of Madina. Giving an example of growth in Scandinavian countries, he claimed these countries had adopted the principles of Riyasat-e-Madina, but Pakistan had lagged behind.

Khan also addressed the issue of Islamophobia, saying it was unfortunately that Islam had become linked to terrorism in the West. Stressing that Islam had nothing to do with extremism or terrorism, he said it was a religion of peace. He reiterated that he had addressed the issued in various appearances at international forums, including the U.N., and the OIC, adding that he would continue to raise his voice against it at every opportunity.

Earlier, chairing a meeting of his economic team, the prime minister said protecting the interests of the common man was among his government’s top priorities and directed authorities concerned to take steps toward reducing the burden of indirect taxes. Noting that indirect taxes placed the most burden on the poor segments of society, he said taxes should be reduced in imported edible items so relief could be ensured for members of the poor and middle classes.

Khan said poor people had been worst affected by ongoing economic concerns, adding that providing them relief was the government’s priority.

In another meeting, the prime minister chaired a meeting of the National Coordination Committee on Tourism and directed officials to continue their anti-encroachment drive without any discrimination. He said cleanliness and environmental protection should be ensured, adding that illegal land encroachment on tourist sites should be prevented.

Khan said relevant by-laws and regulations should be notified before any development work started on tourist sites. He reiterated that Pakistan holds great potential for tourism that could be utilized for revenue generation, employment and heritage promotion. The meeting was also briefed on planning and feasibilities for the development of tourist sites in Punjab, Khyber-Pakhtunkhwa and Balochistan.

He said the revival and development of the agriculture sector was a national priority to cope with food security challenges and to curtail the import bill on food items.

The meeting decided to constitute a committee chaired by the prime minister to expedite the reforms process. The committee would comprise representatives of federal and provincial governments, private sector and experts, and would finalize the Agricultural Transformation Plan and present it to the prime minister for speedy implementation.

The first phase of the Agricultural Transformation Plan has identified eight major steps, including reforms in the seed sector, introduction of digital subsidy, encouraging utilization of modern machinery, effective use of water, provision of credit to farmers, reorganization of extension services, storage facilities and reforms in agriculture research. Under the plan, cotton, olive, genetic improvement in livestock and fisheries have been included in priority areas.