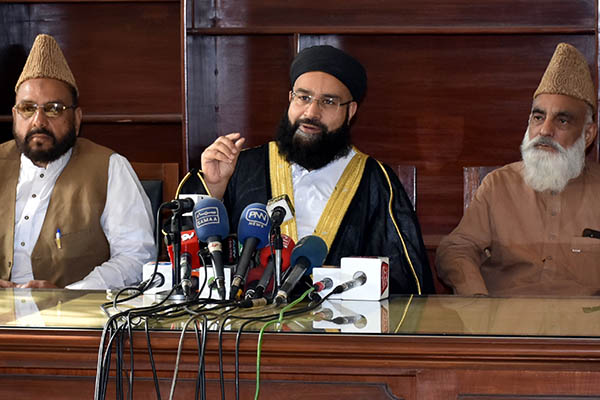 Special Assistant to the P.M. says Mufti Azizur Rehman, accused of sexually assaulting a madrassa student, should be given ‘exemplary punishment’

Pakistan’s ulema are in agreement with Prime Minister Imran Khan over his views on women’s hijab and how they should dress in public, Special Assistant to the P.M. on Religious Harmony Tahir Ashrafi said on Sunday.

Addressing a press conference in Lahore alongside senior clerics, he said that Islam protected women’s rights, adding that Khan’s views on women’s clothing were “in accordance with the holy Quran and the Sunnah.”

During an interview with HBO’s Axios program earlier this month, the prime minister was questioned on whether he believes that the way a woman dresses could impact whether or not she would be sexually assaulted. Claiming his comments were being taken out of context, Khan had defended his views, stating: “If a woman is wearing very few clothes, it will have an impact on the men, unless they’re robots. It’s just common sense.” The comments had triggered mass outrage both domestically and abroad, with critics accusing him of victim-blaming and suggesting how women dress determines if they could be raped.

Ashrafi claimed that Khan’s comments had been targeted for criticism for “political reasons.” He said Quranic instructions about hijab were also applicable to men and they should avert their gaze if they meet women outside their families. However, at no point during the interview did the premier clarify that it was incumbent on men to not act on their impulses; instead he repeatedly pointed to victims—mostly women—as inciting factors if they did not practice modesty outside the home.

The SAPM also hit out at former JUIF leader and cleric Mufti Azizur Rehman, who is currently being investigated for allegedly sexually assaulting one of his students for several years. Stressing that Rehman should be given “exemplary punishment” for his crime, Ashrafi said that child abuse was a crime regardless of where it happened—whether at a madrassa, a college, or a university. He called for “public punishments” for anyone convicted of child or sexual abuse to serve as warnings.

Rehman was arrested from Mianwali on June 20 after a video clip of him allegedly sexually assaulting one of his students went viral on social media. During interrogation, per police, he has confessed to his crime and also admitted to threatening the student with bodily harm if he did not withdraw his testimony against the cleric.

Ashrafi said the government should set up an anonymous helpline to register complaints about sexual abuse of children. He said that pictures of offenders should be shown on television channels and published in newspapers and also appealed to the chief justice of Pakistan to award public and immediate sentences to such culprits. He urged parents to educate children on how they should react and seek out help if anyone attempted to abuse them.

To a question, the SAPM said a mechanism should be implemented to filter out “negative content” on media. “We are not against modern media, but there should be a system for filtering the content being shown there,” he said, adding that mobile phone technology had its own problems and also spread “obscenity.” He also defended Islamabad’s decision to not allow the U.S. to establish any military bases in Pakistan, saying this reflected the will of the people. He said Pakistan had always helped the Afghan people and had facilitated the peace process, adding that problems were created by “Afghan people and political parties.”

He also urged the media against creating “suspicion” about the curriculum for madrassas, saying there were no restrictions on the teaching of science subjects and the Muttahida Ulema Board solely sought to prevent the teaching of “anarchist material.”