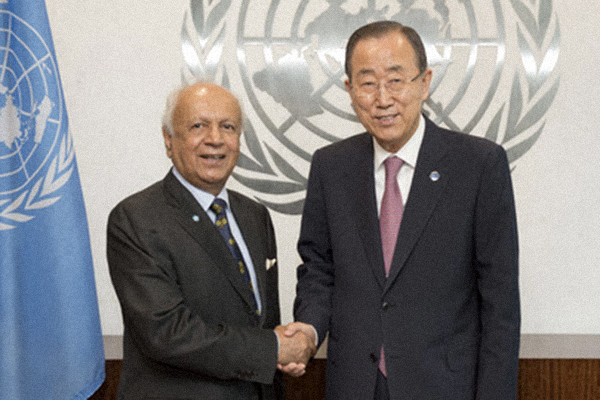 Courtesy of the U.N.

Pakistan’s Qazi Shaukat Fareed has been appointed as the new Permanent Observer of the Parliamentary Assembly of the Mediterranean to the United Nations.

Prior to this appointment, Fareed was an adjunct professor at Long Island University, since 2010, following a 40-year career as a diplomat and an international civil servant.

From 2006 to 2011, Fareed served as special adviser to the director-general of the U.N. Industrial Development Organization (UNIDO), and from 1998 to 2006 he served as director of the Secretariat of the U.N. Systems Chief Executives Board. He was deputy emergency relief coordinator and deputy coordinator for Chernobyl at the U.N. Department for Humanitarian Affairs between 1992 and 1998. Prior to that position, from 1987 to 1992, he served at the office of the director-general for Development and International Economic Cooperation as senior adviser to the Director-General and as member and then director of the Special Commission on Review of Intergovernmental Structures in the Economic and Social Sector.

Two decades of diplomatic service saw Fareed serving as director-general of Pakistan’s Ministry for Foreign Affairs in 1987 after holding several positions in the Permanent Mission of Pakistan to the U.N. between 1980 and 1987, including deputy permanent representative and ambassador.

He also held various positions at the Ministry for Foreign Affairs. Between 1975 and 1980, he was chef de cabinet in the Office of the Secretary-General and in the Office of the Foreign Secretary. During that time, he also served as director for Africa and for External Publicity. Between 1968 and 1975, he served in Pakistan’s missions in Mexico, Portugal, Saudi Arabia and Spain. He was section chief of Economic Coordination and U.N. Affairs between 1966 and 1968.

Fareed holds master’s degrees in economics from Cambridge University and from the University of Karachi. He also holds a bachelor’s degree in commerce from Government College in Karachi. (He is also a member of Newsweek Pakistan’s Advisory Board.)

Shaukat Fareed Ji cogratultions.
And wish u best. What a splendid inning u have you have had and still batting.