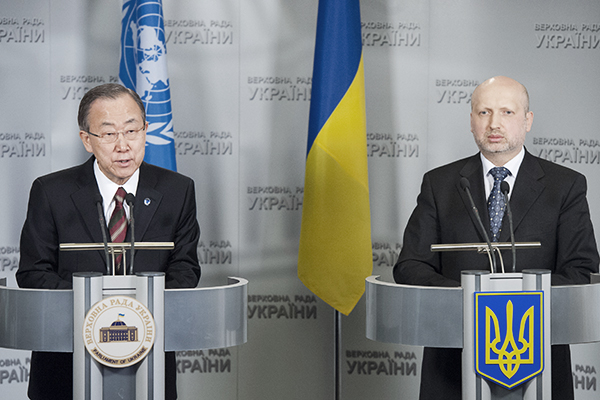 Pakistan abstained from voting on the General Assembly resolution.

The U.N. General Assembly on Thursday declared Crimea’s breakaway referendum as illegitimate and refused to recognize Russia’s annexation of the peninsula.

The nonbinding measure passed with a comfortable majority in the 193-member body, with 100 votes in favor and 11 votes against; but 58 abstained and more than 20 did not vote.

Ukraine, which drafted the resolution, welcomed its adoption and called for a “stronger and more concrete” united, international front against Russian aggression.

“I’m very much satisfied with the vote … [An] overwhelming majority of nations in the world supported this resolution,” said Andriy Deshchytsya, Ukraine’s acting foreign minister. He had urged the international community to back the text, hoping an overwhelming show of support would ward off further Russian intervention on Ukrainian territory. “I am convinced that a strong vote today will help to deter further aggressive moves,” he told the assembly. “It sends an essential message that the international community will not allow what has happened in Crimea to set a precedent to further challenges to our rules.”

Western diplomats wanted a strong majority vote to press home what they say is Russia’s isolation, but there had been fears that a high number of countries would abstain.

Vitaly Churkin, Moscow’s U.N. envoy, claimed the vote was a “moral victory” for Russian diplomacy, saying that “almost half” the U.N. membership refused to support the resolution. “An increasing number of countries are beginning to understand the complexity of the situation and the motives behind the actions of Crimea and the Russian Federation,” he said.

But the resolution did garner more support than a similar text passed in 2009 over the Georgia crisis. Ukraine submitted the draft resolution, writing the text in moderate language in the hope of attracting a maximum number of votes, and it makes no direct reference to Russia. The text is similar to a U.S.-drafted resolution submitted to the Security Council on March 19, which Russia vetoed. China abstained and the other 13 members of the council voted in favor.

Thursday’s resolution repeats that the March 16 referendum in Crimea has “no validity” and asks countries not to recognize any alteration of the status of the Black Sea peninsula. It calls on all states to refrain from any attempts to modify Ukraine’s borders through the threat or use of force or other unlawful means and calls for dialogue to resolve the crisis.

Ukraine said that a vote for the resolution was a vote for the U.N. charter, while a vote against or an abstention undermined it. “One month has cost us dearly. More inaction may cost us this organization,” said Deshchytsya.

The United States backed Ukraine’s request and criticized Russia. U.S. Ambassador Samantha Power told the assembly it was “disheartening in the extreme to see Russia carry on as if Ukrainians have no legitimate interest in Crimea.” She added: “Ukraine is justified in seeking our votes in reaffirming and protecting its borders … We urge you to vote ‘yes’ on a resolution that enshrines the centrality of territorial integrity and that calls for a diplomatic not a military solution to this crisis.”

Russia stuck to its position, saying it had no right to refuse support to Crimeans in their right to self-determination.

The 11 countries that voted against the text were Armenia, Belarus, Bolivia, Cuba, North Korea, Russia, Nicaragua, Sudan, Syria, Venezuela, and Zimbabwe. NATO and Western powers voted overwhelmingly in favor. Among the abstentions were Afghanistan, China, India, and Pakistan as well many South American nations. Israel and Iran were among those that did not vote.