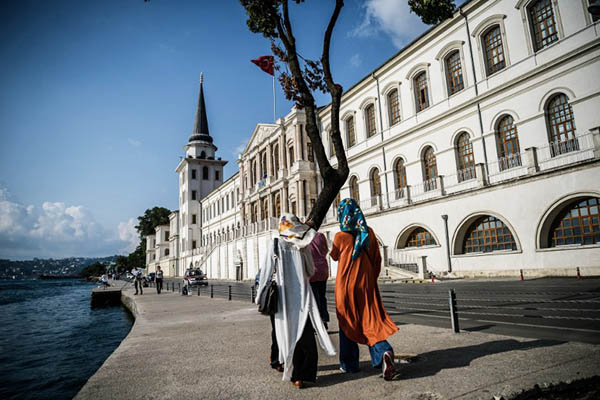 Residents hope school shuttered after failed military coup will be converted into museum.

With its twin pointed towers and brilliant white facade stretching along the Bosphorus, the Kuleli Military High School is one of the most striking late Ottoman sights in Istanbul, a symbol of power and continuity.

Yet after over one and a half centuries of use, the future of the famed building—designed by a great Ottoman Armenian architect—is in doubt after it played an important role in the failed coup aimed at unseating President Recep Tayyip Erdogan.

After several officers working at the school were implicated in the July 15 coup attempt, the school will not continue in its current form, as the authorities seek to flush out all influence of the Muslim preacher Fethullah Gulen, who is blamed for the putsch.

Turkey last month released from jail 62 students at Kuleli—believed to be teenagers unwittingly caught up in the failed putsch and used by their superiors. Turkish state media had quoted the students as saying they were told an operation was under way on July 15 without having any idea of what it was.

“We learnt the true face of what happened after police came in the morning to get hold of us,” one student Ali Akdogan told the Anadolu news agency. “We were deceived.”

The government has issued a decree closing military high schools in the wake of the coup, so the future for Kuleli is unclear, with options mooted including a museum of democracy or even a luxury hotel—an idea which has appalled traditionalists.

Tayfun Kahraman, head of the Istanbul City Planners’ Chamber, described the building as “iconic and etched in the memory of Istanbul.”

“In the future uses of the building, the same memory must be protected,” he told AFP. He said the Kuleli school, which as well as its famous building also boasts vast parklands, should open to public with a green space concept like the Luxembourg Gardens. “There are many examples in Europe: Take for example, the Luxembourg Gardens in Paris. It is a palace garden but in its current form, it is open to public,” Kahraman added.

The Luxembourg Gardens, or Jardin du Luxembourg in French, is one of the oldest gardens in Paris dating back to the 17th century, and home to a palace harboring the Senate as well as a museum open to public. “The same could apply to the Kuleli military school with its forested area when Istanbul’s need for green spots are so obvious,” Kahraman said.

Situated on the Asian side of the Bosphorus in the Istanbul suburb of Cengelkoy near the first bridge, the school’s façade—spectacularly lit at night—wows tourists on cruises even if few are aware of its history.

The school was designed by Ottoman Armenian architect Garabet Balyan who left an extraordinary architectural legacy in the city, including the Dolmabahce Palace of the late Ottoman Sultans. The barracks were transformed into a hospital during the notorious Ottoman-Russian wars in 1877-1878.

The building was used by the British when Istanbul was occupied in 1920 and later given to the Armenian community at the end of World War I to be used as a dormitory for Armenian orphans whose families were forcibly deported during the war.

After the Turkish war of independence the building was given back to Turks under the Lausanne Treaty—founding treaty of the republic—and became a military school again in 1925. There has been speculation the building could be used as a hotel, an option dismissed by the government.

“For God’s sake, who came up with the idea of converting the Kuleli military school building into a hotel?” Defense Minister Fikri Isik told the Hurriyet newspaper. “This is not on our government’s agenda right now.”

Can Atalay, a prominent lawyer, said the building could continue in its current role. “The building had been designed as a military school and used for this purpose for over a century and a half,” he told AFP. “There’s no obstacle standing in the way of the building staying as a school. The coup attempt should not be abused to gain advantages,” he warned.

Fishing in front of the Kuleli building, Ahmet, in his 30s said: “I hope the building will become a museum, not a hotel. Wouldn’t it be much better?”