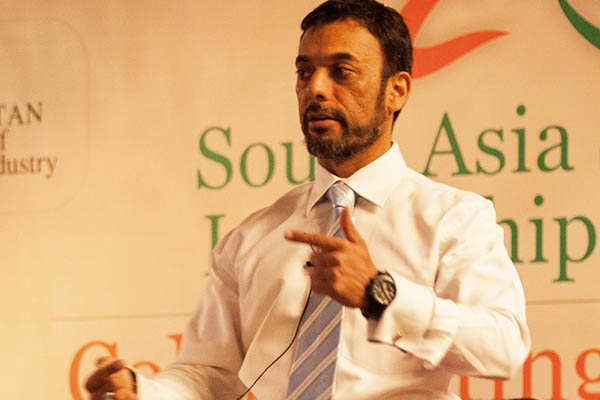 In conversation with Asad Rezzvi, founder of Veritas Ventures.

Since graduating from the University of California, Berkeley in 1999, Asad Rezzvi has built a career on utilizing unique strategies to enhance business bottom-lines and educating senior management on how best to inspire and elevate their workforce. The Karachi native has helmed several high-profile companies through the years since and is currently the CEO and founder of Veritas Ventures, an international management consulting form that works exclusively with high-growth companies and startups. Earlier this month, he sat down with Newsweek Pakistan to offer some advice for corporate CEOs and discuss his entrepreneurial success. Excerpts:

What’s the most common challenge major companies bring to you?

CEO/C-suite executives spend a majority of their time firefighting and reacting to the vagaries of business instead of building their industry. Every CEO must work on two businesses—the one he’s running today and the one he needs to build tomorrow.

To develop a sustainable edge C-executives need to have an execution roadmap—to drive progress, anticipate challenges and address them ahead of time, and finally, to set up a system to handle the day to day. Most senior executives are still working off a business plan—a thing of the past. They get lost in activity, which gives them an illusion of progress. Companies that experience extraordinary productivity have systems in place to drive progress: it’s not an accident.

For example, the telecom industry in Pakistan is in trouble. They’re still selling mobile minutes. The imperative for them is to transform into Internet companies but they’re still operating as large, bureaucratic, rank and file companies with systems, processes and the culture to match. They’re too busy with day-to-day activity, precluding them from driving progress.

What’s the top complaint most CEOs have about their companies?

They want their team to be “motivated!” Pop psychology has created a half-baked awareness, leading people to believe that a pep talk alone can get someone to raise their game so companies spend huge amounts [of money] on training. This only works if employees are given the leeway and empowerment to own their end results. Most employees own the process instead of the end result—the bosses own the end result and like to keep the ‘power’ so their subordinates don’t outshine them—its archaic and counter-productive.

Purpose and drive gets people to deliver awesome results long-term. Unless you create a culture of performance and merit based on an achievable vision, and give your team members real-world ownership of the results, no amount of training and development is going to help. When you give employees ownership of their results they feel empowered and respected and that drives them to become more engaged. That, specifically, was the biggest factor in turning around Wateen Telecom in 3 years—from negative $2 million per month to $1 million cash flow positive.

Tell us about your time at Wateen and the business turnaround. It is a feat seldom seen in Pakistan.

When I joined the company, Wateen was bloated, lifeless and on its last breathe. Employees were focused on protecting their jobs instead of achieving targets. Decision-making was opaque. We meticulously and persistently executed a growth and turnaround roadmap, which I put together. It had three parts: get the employees engaged with a powerful vision and an actionable roadmap; restructure the balance sheet with our finance team; and dominate the market with unmatched customer service and engagement.

We hit huge roadblocks along the way; the head office burned down in one of the biggest fires of Lahore. But we were persistent and along the way got a large number of senior employees to see the vision and buy into it wholeheartedly. It took a massive amount of creativity, huge amounts of energy and a very deep commitment for 3+ years but we accomplished our goal—$2 million per month bleed to $1 million per month positive, with a vibrant culture of performance.

Is there a ‘formula’ for high growth and profitability?

There are key factors that, if optimized, can lead to high growth and profitability:

2. The CEO and CFO must be business partners: most often, especially in Pakistan, CFOs function as glorified accountants. They need to have an entrepreneurial mindset and be creative about maximizing the company’s financial resources. They need to anticipate opportunities; they need to work closely with sales and marketing, even human resources, to ensure the financial lifeline is flowing and being optimized. To do this requires a different mindset than what most CFOs are trained to have: audit, accounting and bookkeeping are only the basics.

3. Customer centricity is absolutely critical, which is possible with a culture of employee centricity. Throwing money on innumerable training workshops whilst maintaining a bureaucratic culture is ineffective. Employees serve customers at the same level they’re engaged by their company.

You worked with the Pakistan cricket team just before their England tour. How did you help them improve their performance?

It was intense work. They’re extremely talented but they’re lacking the resources to take them to world class. However, they’re very driven.

I engaged them in three areas: A-game replication, sports nutrition and injury prevention. A-game replication is a set of modules designed specifically to get athletes to condition their nervous system to perform winning movements without conscious effort. Most pro teams have bio-feedback tech available to enable them to create breakthrough performance consistently—the technology helps athletes to pinpoint weaknesses in their bio-mechanical (body) movements, eliminate them and recondition their muscles and nervous system to instill one-off winning movements for consistent wins. In Pakistan, we don’t have bio-feedback equipment so I had them use specific neurological strategies that allow them to harness their best performance, with acute awareness, and be able to engage and recall it at will. Next, we had to ensure that once they their performance was up to par their body could sustain it so I had them set up a nutrition protocol to support maximum performance, minimize fatigue, and enable rapid recovery. Finally, I had them engage in exercises to reduce injury due to the asymmetric nature of the game. For those nursing injuries we helped them on the path to rapid recovery and instilled kinesthetic awareness for minimizing further injuries.

Your background—healthcare, legal aid, financial solutions—isn’t typical of most business/corporate executives. How did you arrive upon this path?

I was an entrepreneur from the very start, having started one of the first online travel portals when online travel was non-existent. Even though I graduated from Berkeley with a degree in psychology, I never had an appetite for therapy.

This was around the time when the Silicon Valley boom had just begun. Entrepreneurship is a stern teacher; you learn very quickly. Moreover, you realize that as a founder, the energy you bring to the table is the energy your team will emulate—you’re either the bottleneck or the prophet, nothing in between!

You also become ruthless with performance, your own and your teammates.’ The success I had with my first efforts led me onto other entrepreneurial ventures. I was fortunate to have an extraordinary teacher for 10 years, Anthony Robbins (“Top business gurus in the world,” Harvard Business Review). That man knows no limits—not in business, not in health/fitness, and not in spirit. He’s been an adviser to two U.S. presidents, helped ace athletes such as Serena and Venus Williams achieve a higher degree of success, advised billionaires and is himself a super successful entrepreneur with a net worth around $1 billion, plus he’s a top ranked Polo player and in exceptional health!

As one of his coach trainers, I had to raise my game massively in every area of life. I realized that financial wealth was nothing without the energy and passion to enjoy it. Subsequently, I worked with several startup ventures in finance, health and media. That’s where I experienced a new culture of performance and merit take shape, which fostered rapid growth. I also founded a health NGO to help terminally ill patients. Plus, I competed in kickboxing, which is one of the most challenging sports, placing huge demands on the body.

When you put yourself in intense environments you learn to break perceived limits, which helps you in the world of business in dealing with your own and others’ limits—you only realize something is a limit after you break through it!

The question to ask is whether a CEO is willing to mine at least 10% to 25% more cash flow from their current business by making it more effective and efficient.