Home Elections 2013 Under Arrest, Musharraf Vows to Fight On

Under Arrest, Musharraf Vows to Fight On 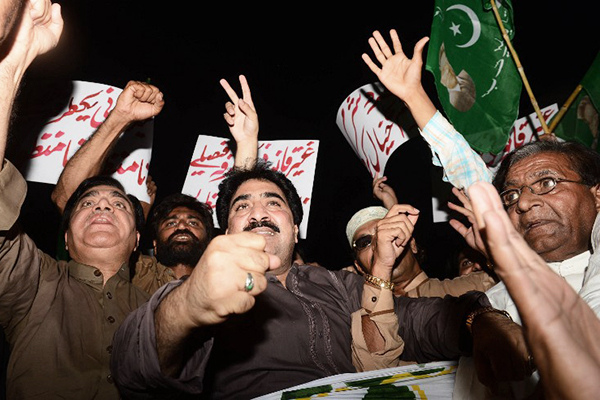 Following his appearance this morning before a magistrate, Pakistan’s ex-president and Army chief Pervez Musharraf has been placed under arrest in Islamabad for at least two days. He has vowed to fight on until his name is cleared.

“Musharraf himself surrendered before the court on Friday morning,” said Muhammad Amjad, a spokesman for the former general’s All Pakistan Muslim League party. “General Musharraf has been sent on a two-day judicial remand and he will stay at his farmhouse.” Amjad said the magistrate has also ordered Musharraf to appear before an antiterrorism court in Rawalpindi after two days, and added that his lawyers would attempt to seek his bail from the Supreme Court today.

“I have today brought an end to the mass distraction and media frenzy generated by the unwarranted act of the Islamabad High Court,” Musharraf posted on Facebook after his arrest. “The allegations leveled against me in the detention-of-judges case could not be further from the truth and were filed against me by an unrelated individual eight months after the alleged act; not even one of the alleged aggrieved judges is the petitioner. These allegations are politically motivated and I will fight them in the trial court, where the truth will eventually prevail.”

The Islamabad High Court canceled Musharraf’s bail, one of several, and ordered his arrest on Thursday over charges that he illegally sacked and jailed some 60 judges, including the country’s chief justice, after imposition of emergency rule on Nov. 3, 2007.

“Confining Honorable Judges of the superior courts and to stop them from the performance of their duties is not an ordinary act, rather it is an act of ‘Terrorism,’” ruled Justice Shaukat Aziz Siddiqui in his verdict Thursday. “Prima facie, offense under Section 7 of the Antiterrorism Act, 1997, is attracted, for which punishment may extend to imprisonment for life.” Musharraf had “spread fear in the society, insecurity amongst the judicial officers, alarm in the lawyers’ community, and terror throughout Pakistan,” he said.

Justice Siddiqui also noted with concern the apparent failure of police to arrest Musharraf outside the courtroom. “The learned Registrar of this court informed that the personal security guards of the petitioner, Gen. Pervez Musharraf, retired, facilitated and helped him to escape instead of surrendering him before local police,” reads the ruling. “This act of the petitioner and his security guards is yet another offense.”

Political analyst Hasan-Askari Rizvi warned that Musharraf’s legal headaches risked overshadowing the upcoming May 11 elections, which will mark the first ever transition in Pakistan from a fully-civilian elected government to another. “If the court starts his trial he will entangle others to save his skin. The case can go in the wrong direction and it may undermine the elections,” he said. “The judiciary is overdoing it. It should show some restraint… It can grant bail now and take up the case after the elections, which should be our primary objective.”

Musharraf’s supporters say the arrest order was nothing more than a settling of scores for his dismissal of judges nearly six years ago. An online petition plugged by Musharraf on his Facebook page against “the ill-conceived decision of the Islamabad High Court against Pervez Musharraf, son of the soil” has so far amassed close to 10,000 signatures.

Musharraf seized power in October 1999 in a bloodless coup, which was widely welcomed at the time in Pakistan, but he was forced out after being threatened with impeachment in 2008. He returned to the country on March 24, after almost four years of self-imposed exile. The elected leader whose government he ousted, Nawaz Sharif, is now the frontrunner to win the elections.