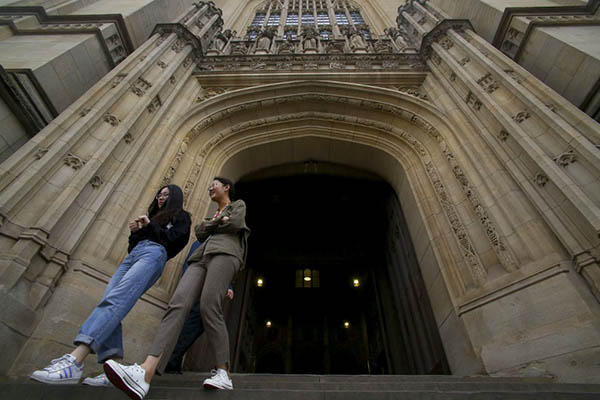 Britain wakes up to plight of student mental health

Around half of the 37,500 students interviewed by The Insight Network, a therapy provider, used drugs and alcohol “as a means of coping with difficulties in their lives.” One in five reported suffering from mental health issues, mostly depression and anxiety, according to the survey conducted at 140 British universities.

In Greg’s case, it was a combination of factors at play, including the disappointment of not liking his course and coping with having more time on his hands. The end of a five-year relationship, on top of the death of his grandparents, however, made things even worse, he said, asking not to be identified by his full name.

Dominique Thompson, a doctor who has treated students for 20 years, said their anxiety could be debilitating and was “not about feeling a bit stressed about exams.”

“They would not be able to go out with friends, to go to their lectures, to study, to read… they stop socializing, leaving their room,” she said. And students with depression sometimes develop “suicidal thinking,” she warned.

Over the last decade, the proportion of British students reporting mental disorders has “significantly increased,” according to a study. From 0.4 percent in 2008, the figure rose to 3.1 percent last year, the study of nearly 2.3 million students published by the Higher Education Statistics Agency indicated.

Jolted into action, the government announced in March the creation of a new working group “to support students to deal with the challenges” of starting in higher education. “Our universities are world leading in so many areas and I want them to be the best for mental health support too,” Education Secretary Damian Hinds said at the time.

Students often impose “extremely high, often unrealistic, expectations” on themselves and have difficulty coping with failure, said Andrew Hill, director of a wellbeing research group at York St. John University. There is also anxiety associated with “seeing mistakes in your work, or that others will spot mistakes you have made,” he told AFP.

Social media, with its visibility and reach, has also contributed to the pressure on young people, said Thompson. “Cake baking is now a competition, putting on makeup is a competition, sewing, painting, sculpture… You name almost anything that could have been fun and relaxing, it’s now become a competition,” she said. “They’re… 24/7 under the microscope because of their social media.”

The doctor also said that the rise in student mental disorders was an international phenomenon. She said students also battled the feeling that it was “no longer enough” to have a university degree because they were now so common.

Another factor can be “helicopter parents,” who micromanage their children’s busy activity-packed routines while they are still at school, leaving them at a loss once they have to manage on their own, she said.

The experts say that universities need to implement new strategies to help struggling students. Non-competitive activities just “for fun” should be introduced, as well as teaching students how to deal with failure, said Thompson.

For his part, Hill urged tutors to receive “basic mental literacy training” to “recognize the signs and symptoms” of potential disorders.

Greg remembers asking for help when he was a 20-year-old student at a top London university in 2013, but said that the process took “so long” he gave up. “They recommended books, numbers to call and asked if I wanted a chat,” he recalled. “They eventually get back to me between eight and 10 weeks after I contacted them. It was very frustrating.”

Some universities have recently taken up new approaches. “Like many universities, we tended to focus on the point when they needed additional support,” said Mark Ames, head of student services at the University of Bristol.

Shocked by the suicides of nine of its students since 2016, the institution set up two services, made up of around 60 staff, who “focus on supporting students’ wellbeing,” such as encouraging them to get more sleep. It is also reviewing how often it tests students and its examinations schedules to “make sure they don’t all bunch at the same time.”

However, it was recently in the headlines after the parents of one of the nine—Natasha Abrahart, 20, a physics student who was found hanged last year—accused the university of failing to do enough. Birmingham University meanwhile told AFP that it was “actively working” on developing a “single strategic framework,” to replace its case-by-case approach.

Greg said that the approach to mental health at many universities had changed radically since his own experience. After a five-year “break,” he has returned to university to study geology.