In direct address to judiciary, ‘neutrals’ PTI chairman tells them to do the ‘right thing’ as they too are being judged 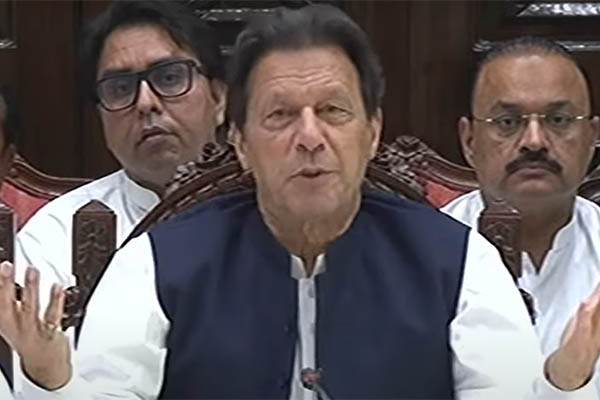 Pakistan Tehreek-e-Insaf (PTI) Chairman Imran Khan on Tuesday dismissed the government’s ban on his party’s long march to Islamabad on May 25, saying he will lead the “biggest procession in Pakistan’s history” from Peshawar to the federal capital.

Addressing a press conference in Peshawar, which per routine for the PTI was only open to journalists from private broadcaster ARY News, he slammed the incumbent coalition government and said there was no difference between its tactics and those of military dictators. Claiming that the PTI government had allowed the-then opposition to stage protests and long marches, he said it had never resorted to banning their gatherings.

The ousted prime minister said the country was looking toward the judiciary for action, adding that the PTI’s long march was a peaceful protest that was their democratic right. “Did we protest when [PPP Chairman] Bilawal staged a long march? Did we arrest him? Fazlur Rehman also staged a march,” he said.

Urging the judiciary to not allow such harassment and raids to continue, he claimed that if it did not act, it would lose all credibility. “It would mean there is no democracy in Pakistan,” he added. He also took the country’s bar associations to task, questioning why they had not condemned the raids. The Supreme Court Bar Association, earlier in the day, did issue a condemnation and urged the government to allow the PTI to proceed with its protest, as was its constitutional right.

In a change of stance, the PTI chairman said “staying neutral” was no longer an option—just a day after he had urged the military to stand by its stance of “neutrality” with regards to the long march. “You have to decide which side you are on. God has not given us permission to walk in the middle; that means you are helping the criminals,” he said, adding that the “neutrals” had taken an oath to protect the country’s independence and sovereignty. “You need to understand that the public is looking at you, and you will also be judged. You will be equally responsible if the country goes towards destruction,” he said. Khan has previously said that whenever he refers to “neutrals,” he is speaking of the military establishment.

Reiterating that the only solution to the current unrest was early elections, he said that if the current situation were allowed to continue, the country could head down the path of Sri Lanka, which is currently in the midst of an economic crisis and has defaulted. “I want to give a message to everyone: Neutrals and lawyers, this is a defining moment,” he added.

Referring to the killing of a police constable in Lahore by a PTI worker, he appeared to justify it by claiming that a retired major had assumed he was being robbed when cops raided his home. “People should be thankful this didn’t happen in more places,” he added.

The PTI chairman also reiterated allegations that the current government had been brought into power by the U.S. because it would bend over backwards for them. “All of their assets are abroad, they are slaves … 400 drone attacks were carried out when Zardari and Nawaz were in government but they did not say a single word,” he said, falsely as both the PPP and PMLN governments had repeatedly condemned the strikes and criticized the U.S. for civilian casualties.

Urging his supporters to “leave fear behind,” Khan said the government’s raids were intended to intimidate the PTI. “Will we accept the government of thieves because we fear going to jail? How many people will they send to jail, do they have that many officials? They can’t do it. You don’t have to be scared of anything,” he said, adding that he was not scared for his life and neither should anyone else be. “Death is preferable to slavery” under this government, he emphasized.

The former prime minister said that even though the government had shut down Islamabad and Rawalpindi, his supporters should still leave their homes and join the long march. “They don’t have that many police officials to carry out arrests,” he said.

According to Khan, Prime Minister Shehbaz Sharif has installed a “criminal” as the Islamabad police chief. He also questioned how the Punjab police force and bureaucracy could follow the orders of Chief Minister Hamza Shehbaz when cases were pending against him and he had already lost his majority in the Punjab Assembly. “Action will be taken against the bureaucracy if you follow unlawful orders,” he warned.

The PTI chairman concluded his press conference by addressing youth, saying the country’s future was at stake. “There is no future if these leaders stay. There are two paths; one is destruction and the other is real independence,” he claimed. “If someone wants to stop us [from the long march], do it. But no one can stop this sea of people,” he added.