Uneasy Calm After Weekend of Sectarian Violence in Jehlum 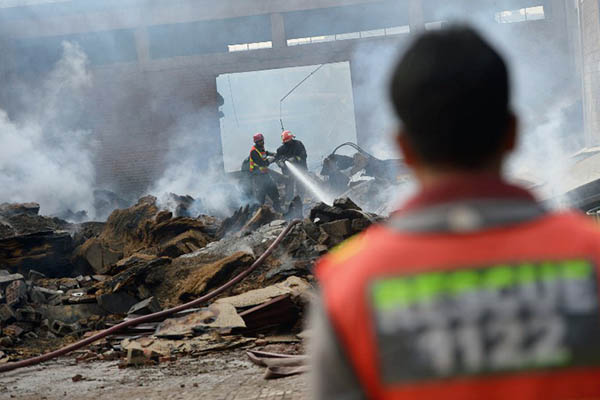 Officials in Jehlum, which was hit by sectarian riots over the weekend, called a meeting of religious clerics on Sunday to defuse tensions as scores of Ahmadi Muslims reportedly fled after a weekend of violence.

The unrest began Friday when an angry mob in the city torched a factory after one of its employees, a member of the persecuted Ahmadi sect, was accused of committing blasphemy by burning pages of the Quran. On Saturday, protesters ransacked an Ahmadi mosque in the congested Kala Gujran area of the city and set fire to some Ahmadi homes.

Ahmadis are legally declared ‘non-Muslims’ in Pakistan and frequently persecuted for their beliefs. “We have called the local clerics and traders and they have agreed to help restore peace because they are convinced that violence is not Islamic,” said Zulfiqar Ahmad Ghumman, chief of the district administration. He added that authorities would hunt down those responsible for the violence.

Tensions remained high Sunday as police, paramilitary Rangers and soldiers patrolled the city to keep it calm. “Around 18 Ahmadi families live in this neighborhood. They had already left their homes for protection even before the mob attacked their worship place here,” said Chaudhry Muhammad Asif, a local councilor in Kala Gujran. Resident Najabat Butt blamed police for not doing enough to quell the rioters when the Ahmadi mosque was ransacked.

“I saw hundreds of protesters gathered here and trying to attack the Ahmadis’ worship place. Police were already present there and tried to disperse them by using tear gas and firing into the air, but the protesters hit back and pelted stones forcing them to run away,” he said.

Blasphemy is a hugely sensitive issue in Pakistan, an Islamic republic of some 200 million, where even unproven allegations frequently stir mob violence and lynchings. Eleven Ahmadis were murdered for their faith in 2014 and authorities have failed to apprehend any of the killers, highlighting growing intolerance toward the sect.