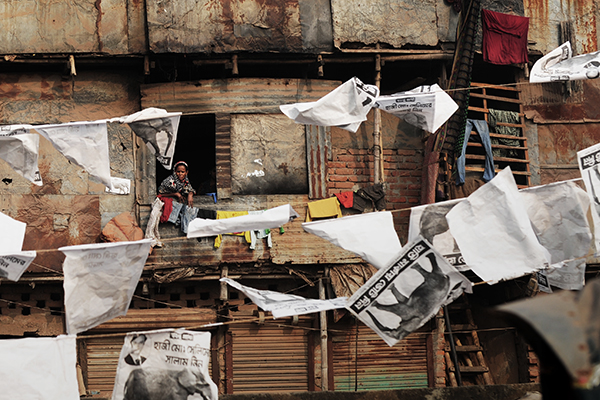 On the morning of Feb. 21, 1952, hundreds of students came to the Dacca University campus in East Pakistan to protest against restrictions placed on public assembly. These students were part of the movement that sought official recognition for Bangla—the language spoken most widely in East Bengal and the mother tongue of most—equal with Urdu. Scores also demonstrated at the East Bengal Legislative Assembly. And when some of them attempted to enter the premises, the police opened fire. Several were killed. It was thus that Feb. 21 came to be known as Martyrs Day. The Language Movement, which would ultimately culminate in what Bangladeshis call the War of Liberation of 1971, was now unstoppable.

Exactly 63 years later, I entered a packed hall at the impressive Alhamra Arts Center for the Lahore Literary Festival (LLF) to speak about my latest book, The Colonel Who Would Not Repent: the Bangladesh War and its Unquiet Legacy. My co-panelists included human-rights activist Hina Jilani and Bangladeshi poet Sadaf Saaz Siddiqi. The session, “An Interview with Bangladeshi History,” was moderated by musician and academic Taimur Rahman, who had the unenviable task of steering a discussion about my book, and the 1971 war which broke Pakistan, that was bound to reopen old wounds.

Rahman was generous in his praise of my book, calling it “a readable unreadable book,” in that it was easy to read, but the stories it contained made him uncomfortable as a Pakistani. Our initial conversation was like in a tense Test match: straight deliveries played back with a straight bat. But then Rahman turned to the tougher questions. How did I feel being in Lahore, telling Pakistanis what they had done?

At least half of the audience hadn’t been born at the time of the 1971 war. They were interested in literature and ideas; they were Lahori liberals, willing to listen to another point of view. They had shown courage in attending LLF within days of a bomb blast. There were security vehicles and armed guards outside the Alhamra, snipers on the rooftops, and uniformed men with weapons inside. They knew, and applauded, Jilani’s views on the role of Gen. Yahya Khan’s Pakistan Army. But what I had written about went close to the bone.

Some probably saw me for what is part of my identity—a man born in India, with which Pakistan fought wars, and which local textbooks blame for dismembering Pakistan and deviously helping Bangladesh become independent. We all have our baggage: my textbooks told me that India intervened in 1971 only after the Pakistan Air Force struck Indian airfields on Dec. 2, 1971, and that Indian motives were primarily driven by the humanitarian impulse to end conflict, to bring peace, and to help the nearly 10 million refugees return home—this is a view not only many Pakistanis but some Bangladeshis also question.

Those in the audience were not responsible for what happened in 1971. Military ruler General Yahya had refused to hand over power to the Awami League, which had swept the 1970 Pakistan elections. Of course, all Pakistanis did not endorse the junta, and I mentioned some courageous, positive examples: the Air Force officer who became a conscientious objector and refused to bomb civilians; the colonel who left the Army and, over the years, wrote poetry and tried to reconcile the two nations; another officer who wrote about the incidents of rape he knew were happening; Faiz Ahmad Faiz, who would write the moving ghazal, known as Dhaka se Wapasi (Return from Dhaka), which, as per Kashmiri-American poet Agha Shahid Ali’s translation, goes: After those many encounters, that easy intimacy, we are strangers now/After how many meetings will we be that close again?

Horrible things were done in your name and there has been no accountability, I said to the audience. Jilani was not one to let her compatriots off easily. She had protested against the war and shared her experience with the audience of trying to get Pakistanis to oppose violence in East Pakistan by signing petitions on Mall Road in Lahore, only to be ridiculed at that time. (She said she had heard of other antiwar activists of the time being spat on.) She recalled how her father, who wrote to General Yahya protesting the military crackdown, was arrested and jailed for six months in 1971. “We were silent,” she reminded the people, “we were responsible.” And she got resounding applause.

Rahman then asked me about the controversy over the numbers: were 3 million people killed as Bangladesh says or 26,000 as the Hamoodur Rahman Commission said? Were 250,000 to 500,000 women raped? I have written in my book that the exact numbers are not crucial, what happened is. The deaths weren’t as low as 26,000 and may not have been as high as 3 million, but many, many innocent civilians were killed. There were dozens of camps where women were taken against their will. Many were raped, often every night, and this went on for months. Was it a quarter million or half million cases of rape? We can’t know for sure because the records were destroyed long ago. But in the course of my research, I have met some 28 of these women.

Siddiqi, who has worked for the rehabilitation of birangonas, as the Bangladeshi women who survived sexual violence in 1971 are known, explained that the records were not kept because Bangladesh is a conservative society and rape carries a stigma. As a consequence, it has become difficult to establish what had happened, and in the absence of records, making a legal case against alleged perpetrators has become complicated. The Bangladeshi state ended this rehabilitation work when Sheikh Mujibur Rahman was assassinated in 1975. It is now carried on by several nongovernmental organizations. But many birangonas are still alive, and Siddiqi spoke movingly about their forever-ruined lives.

At this point, a man in the audience shouted, “This is rubbish.” He began walking out of the hall, saying, “This is Indian propaganda; Pakistan Army Zindabad.” I told him to let Siddiqi complete, but he ignored me. Several Pakistanis shouted at him, saying he should be ashamed, that Pakistan owed Bangladesh an apology. The mood had begun to turn. Another man got up and emotionally apologized to Siddiqi and all his Bengali sisters. Others too rose, asking why they were not being told what had really happened in 1971. The conversation that was difficult to begin in Pakistan was finally getting started. The man who had heckled was escorted out. But his intervention allowed others to challenge me.

How does one stay neutral talking about rape? But instead of saying that, I spoke of the perils of whataboutery: two wrongs don’t make something right; a wrong committed by X does not permit Y to commit a similar wrong, nor does Y’s committing a wrong absolve X of what he did. Jilani rightly explained the overriding principle that a state is held to higher standards than a nonstate actor—which the Mukti Bahini was. An army accountable to a state cannot retaliate the way it wants against a guerrilla force. I mentioned the obligations international humanitarian law, through Geneva Conventions, places on armies. Read the book, I told the skeptics. “If you don’t believe me, and if you don’t want to buy it, borrow it from a library, but please read it first.”

Rahman asked whether it is possible to move on and get closure. I recounted what the Bangladeshi academic Meghna Guhathakurta had told me. Her father, Prof. Jyotirmoy Guhathakurta, was one of the first intellectuals killed by the Pakistan Army on March 25, 1971. She said it is easy to ask the victim if she is willing to forgive and move on. But before she can forgive, there has to be someone expressing remorse. And where is the remorse? And what would that remorse look like? If Berlin can have a Holocaust Museum, can Islamabad have one? At this, there was applause—louder than I have heard any time when I’ve spoken. It was long and thunderous; it still reverberates in my ears. It was a powerful sentiment, and it possibly made many people uncomfortable, but it needed to be said. And I was merely the messenger; the voice came from the survivors of 1971.

Later that afternoon, many Pakistanis came to me and asked me how I could stay so calm when challenged. I said I believed in the power of the stories I had heard, which I believed, and which I had told in the book. And I wasn’t taking it personally, just as I was not accusing anyone personally in the audience. If what you are saying is the truth, then you are never alone, as Gandhi had taught us, I said.

Many bought my book and got me to sign their copies. Several came and took photographs with me. Some exchanged email addresses, a few have written to me since and I’ve written back. Most of them were young. They had grown up on false histories written by the state. They were discovering parts of the past kept hidden from them. They found those stories understandably uncomfortable.

Mofidul Hoque of Dhaka’s Liberation War Museum once told me the story of a young Pakistani woman who visited the museum and made a video, addressed to her parents’ generation, where she says: “You kept it hidden.My community kept it hidden. I kept it hidden.” In Kamila Shamsie’s 2002 novel, Kartography, Maheen tells Raheen: “The truths we conceal don’t disappear, Raheen, they appear in different forms.” Pakistan needs conversations that can unravel those truths.

February 21 is now recognized as the International Mother Language Day. The day after our LLF session I read in local newspapers that young students in Sahiwal, a town 170 kilometers from Lahore, had danced and performed folk songs, celebrating International Mother Language Day. At the Lahore Literary Festival itself, there were conversations not only in English and Urdu, but also in Seraiki and Punjabi. Somewhere beyond that auditorium, in spite of that heckler, and in spite of understandable skepticism among some in that audience, a simple message was getting across: that people have the right to speak and express themselves in the language of their choice. And, as historian Romila Thapar had reminded us while opening the festival, history is a dialogue between the present and an assumed past. Therefore, we should all question our histories.