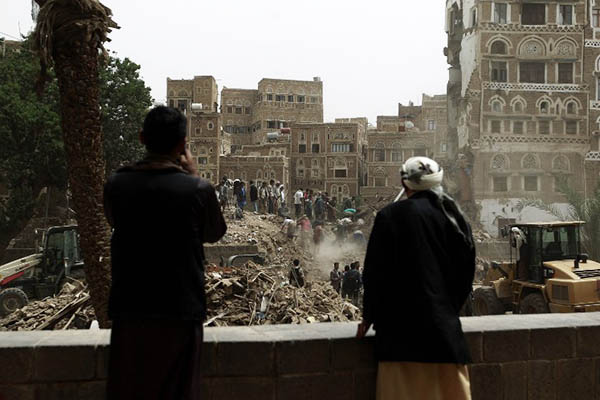 Riyadh has denied it carried out the strike that leveled ancient houses in the Yemeni city’s old quarter.

UNESCO condemned on Friday the destruction of ancient houses described as a “jewel” of Islamic urban landscape in an alleged Saudi Arabia-led airstrike on the Yemeni capital’s old quarter that killed five people.

The incident came just ahead of U.N.-sponsored talks in Geneva in their first bid to break a deadlock after more than two months of Saudi-led airstrikes on Yemeni rebels. The World Health Organization claims 2,584 people have been killed in fighting in Yemen as of June 7, with 11,065 wounded.

The coalition led by Riyadh denied claims that it had carried out any airstrike in Sanaa, suggesting instead that a rebel munitions cache may have exploded. Residents of the quarter, meanwhile, said a pre-dawn strike was the first direct hit there since the launch of the campaign against Iranian-backed Houthi rebels in late March.

The missile hit the Qassimi neighborhood without exploding, but killed five residents, including a woman and a child, and destroyed three three-storey houses, medics and witnesses said. “We saw the flashing light of the missile launched from a plane. We expected it to explode, but it did not… We felt the impact of the missile when it hit the ground,” said resident Ahmed al-Ameri.

Sanaa’s old city has been inhabited for more than 2,500 years and was a major center for the propagation of Islam, boasting more than 100 mosques, 14 public baths and more than 6,000 houses built before the 11th century. It was inscribed on UNESCO’s World Heritage List in 1986.

UNESCO director general Irina Bokova said she was “profoundly distressed by the loss of human lives as well as by the damage inflicted on one of the world’s oldest jewels of Islamic urban landscape.” She said she was “shocked by the images of these magnificent many-storeyed tower-houses and serene gardens reduced to rubble. The historic value and memories enshrined in these sites have been irreparably damaged or destroyed.”

Naji Saleh Thawaba, head of Yemen’s General Organization for the Preservation of the Historic Cities of Yemen also condemned the attack. “I never imagined that this site could one day become a target; even if there were enemy [positions] in the area, it should never be a target for airstrikes,” he said.

The upper storeys of the old quarter’s houses rising above ground floors constructed of stone are built of rammed earth and burnt brick, with each building decorated with geometric patterns of fired bricks and white gypsum, inspired by traditional Islamic art.

The spokesman for the coalition, Brigadier General Ahmed al-Assiri, said there was no raid on the site. “For sure we did not conduct any operation inside [the] city,” he said. “We know that those sites are very important.” He said rebels might have been hiding weapons or ammunition in the area.

In Sanaa, there were conflicting statements from residents about whether rebels had occupied one of the houses. The old city has already suffered some damage from airstrikes on nearby targets, including the defense ministry, prompting a protest from UNESCO in May.

Earlier this month, UNESCO also condemned airstrikes that hit the ancient Great Dam of Marib, which was first built in the 8th century B.C., in the city that was once the capital of the kingdom of Saba. The U.N. body said the attack on the dam came a week after the national museum in Dhamar, in central Yemen, was “completely destroyed.”

In other developments on Friday, Assiri said rocket fire from Yemen killed at least one civilian at a mosque during Friday prayers in a Saudi border community.

Saudi Arabia launched the air war on March 26, as the rebels and their allies among forces loyal to ex-strongman Ali Abdullah Saleh advanced on President Abedrabbo Mansour Hadi’s refuge in Aden. Hadi had fled the capital, which the rebels seized unopposed in September, and was rushed to safety in Saudi Arabia as the Houthis closed in on Aden.

Analysts say the intervention was aimed at preventing the Sunni-dominated kingdom’s regional rival, Shia Iran, from gaining a foothold on its southern border. The U.N. said peace talks between the warring factions, originally scheduled for Sunday in Geneva, would now take place the following day, attributing that to “unforeseen circumstances.”