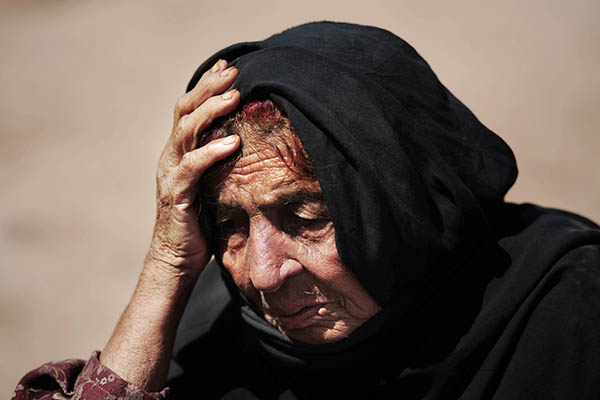 At the age of 20, when most young women dream of an ideal future, Sajida’s life took an irreparable turn for the worse. A bomb in Jalozai camp killed her 20-year-old husband, leaving her a widow with a three-month-old son.

“I don’t know what the future holds for me, but I am worried about my child’s future; how will I feed him and clothe him,” Sajida said, quietly sobbing behind her veil. The death of Sher Rahman, one of 15 people killed in the March attack, left Sajida’s fate in the hands of her elderly grandfather-in-law and her brothers-in-law.

Fortunately, Sajida was identified by the U.N. refugee agency as one of the internally displaced people (IDPs)—those forced from their homes by the unrest in Pakistan’s Federally Administered Tribal Areas (FATA)—who are in need of special protection. It is one of UNHCR’s key responsibilities.

Although UNHCR is known mainly for its decades of work with Afghan refugees in camps in Pakistan, Jalozai is the largest of three official camps for IDPs. It hosts around 57,000 of the 80,400 IDPs in camps—the vast majority of 710,000 IDPs from FATA live with friends, relatives or rent elsewhere.

In the camps, UNHCR, together with other humanitarian agencies, is supporting government officials who have primary responsibility for administration and security. Under the U.N. inter-agency cluster approach, UNHCR is the lead agency for protection, shelter and camp management. That includes assisting vulnerable children and women like Sajida; women and children constitute 77 percent of all IDPs.

UNHCR, with the help of partner agencies, has taken steps to ensure Sajida has unhindered access to assistance. That involves something as basic as ensuring she receives food rations, which used to be collected by her husband. The grandfather of her husband has been authorized to collect her rations, saving her from standing in long queues.

“I’m glad that UNHCR has agreed to let my grandfather be my guardian, this way, at least one of my worries about the food collection is gone,” Sajida said from Jalozai.

To identify women and children at risk like Sajida, UNHCR and its partners regularly conduct focus group discussions with IDPs about their concerns. Other protection interventions include registering new IDPs and providing legal assistance through four legal clinics run by its partners. UNHCR actively assists government authorities to ensure IDPs’ basic human rights are respected.

UNHCR also maintains four “Grievance Desks” in Jalozai camp to register the IDPs’ protection concerns and ensure the timely solution of grievances. In view of cultural sensitivities, separate desks serve men and women, providing essential information on issues such as food distribution, the process of returning home and return packages.

A mobile protection team assists IDPs with problems related to civil documentation, rents, registration procedures or other legal matters. It provides legal assistance at food distribution points on problems such as school enrolment, examinations and attestation of documents in district courts and makes referrals to other service providers.

“UNHCR underlines the importance of dedicating special attention to camp environments, particularly for the most vulnerable segments of the population such as women, girls and boys,” said Neill Wright, UNHCR Representative in Islamabad. “UNHCR will continue to maintain an active presence in Jalozai camp and cooperate with governmental institutions and other humanitarian agencies to reinforce the protective environment inside the camp.”

Although Sajida’s experiences reflect the cost of war on women and children, she is fortunate to have a huge extended family. Many other women in the camp have only their own resilience—and the help of UNHCR and other humanitarian organizations—to fall back on.