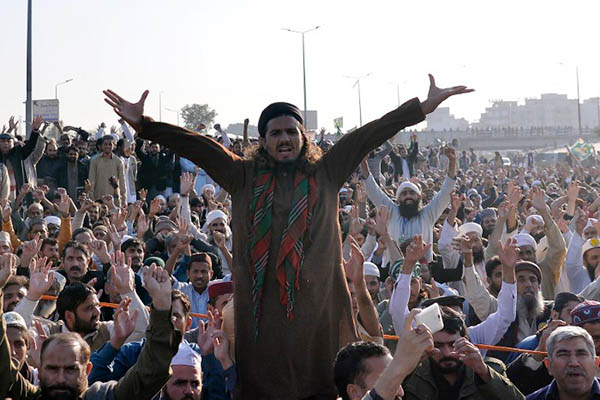 Could the PMLN government and the Pakistan Army finally find common ground against the Tehreek-i-Labaik Ya Rasool Allah?

On Wednesday, Nov. 22, Inter-Services Public Relations (ISPR) spokesman Major-General Asif Ghafoor referred to the ongoing barricade of the passage between Rawalpindi and Islamabad by the Tehreek-i-Labaik Ya Rasool Allah, claiming that while “it would be preferable to address the situation through peaceful means, the military would abide by whatever decision the government took.” In short, the Army has signaled that it is on the same page as the Pakistan Muslim League (Nawaz) government if it decides to use muscle against the religious party and summons the Army to sort out the mob.

Perhaps the ISPR was reacting to Leader of the Opposition in the National Assembly, the PPP’s Syed Khurshid Ahmed Shah, who has advised the government to call in the Army to resolve the situation. In that light, the ISPR’s message is a good omen, but it might also point to a reversal of policy within the Army. Earlier this year, Ghafoor acknowledged the military had recommended the government work to “mainstream” terrorists and make them part of the political process. Following that claim, the internationally sanctioned Jamaat-ud-Dawa of Hafiz Saeed contested the NA-120 by-elections in Lahore under a thinly-veiled pseudonym. Unpredictably, the “anarchist” Labaik also pursued that same “mainstreaming.”

The Pakistan Army is increasingly seen, both at home and abroad, as the arbiter of foreign policy and internal security, reacting aggressively to any perceived challenges to its authority by the elected government. Using dozens of its retired officers as proxies on talk shows, the military has pushed against any diplomatic initiatives with neighboring India. It has also exerted great focus on eliminating the Mutahidda Qaumi Movement (MQM) from the national scene because its founder Altaf Hussain allegedly took funding from India’s spy agency, RAW, to create mischief inside Pakistan.

Coming to the help of the PMLN government to pacify a terrorized Karachi, the Army tried to kill the MQM by merging its two splinters but without success. In Pakistan’s bipartisan politics, it has serially manipulated the downfall of consecutive PPP and PMLN governments to prevent any normalization of relations with India. The current crisis inclines observers to the view that ousted premier Nawaz Sharif has been removed from the scene because of his stubborn resolve to normalize with India.