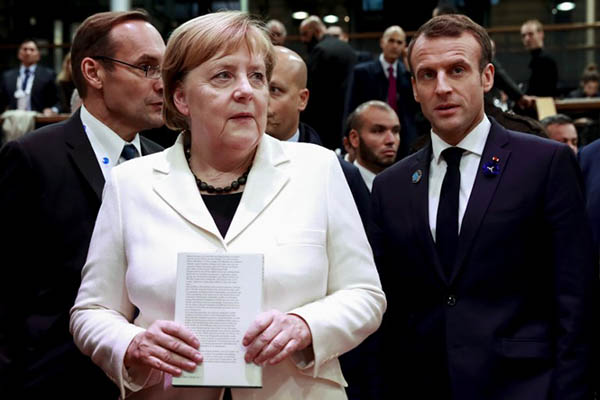 French President Emmanuel Macron, German Chancellor Angela Merkel and U.N. chief Antonio Guterres took turns in warning about the dangers of nationalism on Sunday as they marked the centenary of the end of World War I.

Without mentioning U.S. President Donald Trump by name, all three of them railed against his worldview and the dangers of disregarding international norms as they spoke at the start of the Paris Peace Forum on Sunday.

“The concern I have is that blinkered nationalist views may gain ground once again,” Merkel told fellow leaders gathered at the Paris Peace Forum. She also warned that such attitudes meant “the peaceful balancing of interests, even the European peace project—people are calling them into question again.” She also criticized the idea of isolationism, which she said “wasn’t the right solution more than 100 years ago. How can it be the right solution today?” She added: “We know that most of the challenges and threats of today can no longer be solved by one nation alone, but only if we act together.”

Trump, who attended a WWI memorial service in Paris earlier in the day but snubbed the peace conference, is a proud nationalist who has made “America First” his political slogan.

U.N. chief Antonio Guterres meanwhile warned of “parallels” between the present day and the unstable and dangerous 1930s as he marked the centenary of World War I in a speech at the Paris forum. “As I see it, several elements today have many parallels with both the start of the twentieth century and the 1930s, giving us grounds to fear that an unpredictable chain of events could ensue,” said Guterres. He warned about the “polarization of political life” and rising tensions over trade. “A weakening of the democratic spirit of compromise and an indifference to collective rules are twin poisons for multilateralism,” he added.

Macron gave short opening remarks at the Forum that were similarly downbeat. He asked how the image of more than 70 world leaders including Trump and Russian leader Vladimir Putin paying their respects to the war dead in Paris on Sunday would be remembered.

“Will it be a photograph of the last moment of unity before the world fell into a new disorder?” he asked. “The world we live in is being undermined by crises which are destabilizing our societies,” he said, listing climate change, terrorism, cyber-crime and nuclear proliferation. “We are being undermined by the ‘sad passions’: nationalism, anti-Semitism, extremism…”