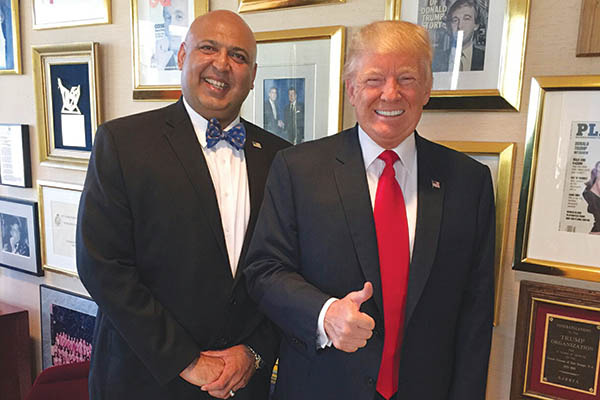 In conversation with Sajid Tarar, founder of American Muslims for Trump.

Sajid Tarar went viral on social media and attracted media attention after he gave the closing prayer at the Republican National Convention in July. The founder of American Muslims for Trump, Tarar became an American citizen in the 1990s, and currently lives in Maryland. Newsweek Pakistan spoke with him recently about his support for the controversial president-elect and Pakistan’s options in dealing with the Trump administration. Excerpts:

Why did you decide to support U.S. president-elect Donald Trump’s campaign?

I’ve been with Trump since the day he announced his candidacy. I studied political science in Pakistan, and I came to the United States as a law student, so I have always had a passion for democracy. In the last eight years, there has been a decline in democratic values. President Barack Obama pushed us toward socialism. And then Trump came and his ideology impressed me. He can deliver. He doesn’t need the popularity, he was already very popular. And he doesn’t need the money; he was already rich. But if you ask me why I am a Republican? I grew up with conservative values in Pakistan, which was what initially drew me towards the Party.

When did you first meet Trump?

I’ve met him at least four or five times, but my first one-on-one introduction was in June. I founded my organization, American Muslims for Trump, soon after he announced he would be running. Shortly after, his campaign asked me to join their National Diversity Coalition. The coalition included 36 people from diverse backgrounds. All of us were invited to his office at Trump Plaza in New York. When I first met president-elect Trump, he thanked me for my efforts and said he will never forget what I am doing for him. He is 70 years old, but he looks much younger. In person, he is caring, appreciative, and humble, the complete opposite to how CNN portrays him.

Tell us a little about American Muslims for Trump.

I have a total following of 10,000 people. Around 8,000 are Muslim-Americans, a lot of them second-generation. And the rest are non-Muslim Americans of diverse backgrounds, many of them soldiers. I’ve registered the organization as Muslims for America after the election.

Following his win, Trump reiterated his vow to introduce a Muslim registry. As a Muslim, does that concern you?

None of this has come directly from Trump. His surrogates and supporters may have said it, but he has not given any indication of a clear policy. If you ask him, Trump will tell you that the media has misquoted him. Yes, he wants a temporary ban on Muslim immigration until we figure out what is going on. He has told me this personally, several times, that he is not against Muslims and has several Muslim friends. But he is against troublemakers. Our immigration system is in shambles. There were 800 individuals on the list for deportation, but due to some error, all of them are now American citizens. The San Bernardino shooter was the son of a Pakistani immigrant. The Orlando shooter was the son of an Afghan refugee. These people come here and instead of appreciating what America has given them, this is what they do. Does America not have a right to protect itself? I’m a U.S. citizen. I have four kids. The safety of the American people and property is my number one priority. 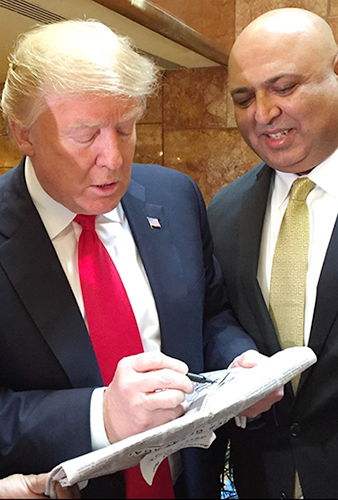 Has the Pakistani government contacted you to lobby for them with the new president-elect?

Pakistan’s Ambassador to the U.S. Jalil Abbas Jilani is a dear friend of mine. At 9 a.m. on Nov. 9, after the election results were announced, he called me. We spoke at length about several issues, and I told him I would do whatever I can to help. I’ve been approached by a couple of other people, but I’d rather not reveal their names. Ultimately, Pakistan wants a good working relationship with the incoming administration. There is a fear that Trump is leaning toward India. But let’s get some perspective here; the Indian American community has done a lot for him, whereas I’m the only person in his camp from the Pakistani-American community. I am one, they are several. Our community completely abandoned Donald Trump. They were very disrespectful to me throughout the election cycle. I got hate mail not only from Pakistan, but from the Middle East also. Pakistani news anchors who had come to the United States to cover the elections were hostile to me. They had a sarcastic tone. I was surprised. Reporters are supposed to be neutral.

I have a complaint and I have conveyed it to the ambassador. Pakistan had no strategy for what would happen if Trump actually won. They did not prepare for it. So now India has a head start. Indian-Americans have raised millions and millions of dollars for Trump. And yet, we expect the relationship to be balanced. It is just not possible. There’s a list of six countries that will be part of the extreme vetting process, and Pakistan’s name is on it. At least that is what I have been told by Trump’s supporters. Regardless, I will do what I can. I am meeting Trump on Jan. 4. I’ve told the transition team that I am not looking for a paid job but a position in which I can serve Muslim countries, particularly Pakistan.

Tell us what Trump knows about Pakistan.

He knows what all Americans do about Pakistan: nothing but terrorism. Another thing America knows is political corruption. Lastly, America knows Pakistan as the state that begs for money whereas India has its own sovereignty and position. Pakistan’s image is Zardari, Bilawal, Nawaz Sharif, and Hamza Sharif—and then you expect respect from the world? You’re behind, and need to wake up.

What should be Pakistan’s strategy moving forward?

Well, the damage is already done. I keep telling the Muslim community here: You need Donald Trump; Donald Trump doesn’t need you. If they want to bridge the divide then they will need to condemn terrorism. After I came out of the Republican National Convention, three sitting governors of the Republican Party called me the same night and said: “You are our hero, but where are the other Muslims like you?”

As for Pakistan, it has in the past played a double game. No U.S. congressperson or senator trusts Pakistan. Thank God for General Raheel Sharif, who has conducted 12,000 operations. But the minute ties with the U.S. slow down, Pakistan starts hugging China to snub the Americans. And then we ask why America leans toward India? Because you’ve gone to the Chinese camp.

Is there a political party you support in Pakistan?

In the last election, I was praying for Imran Khan to win. Like Trump, he too is a political outsider. He is not part of the corrupt system, and he’s foreign-educated and well-recognized at the international level. I respect his party. Khan needs a role in Pakistan’s political future, otherwise we’re all doomed!

Kumar was an important part of the campaign’s fundraising activities. I’m a one-man show on the Pakistani-American side, whereas the Indian-American side is loaded with deep pockets and influence. A few months ago, an individual, who I cannot name, told me what happened with Pakistan’s F-16 deal. He told me why it didn’t go through. Indian-Americans were writing letters to their senators and congressmen for the deal to be scrapped. That is the extent of their influence here.

‘Elite’ Have to Make Sacrifices in Difficult Times:...

Dear brother.I read the whole situation and really u doing a great job especially for Pakistanis and also for Muslims allover the world. At this time you r only hope and voice for Muslims and pakistan.
I’m impressed.

negligence of present government and the people paying