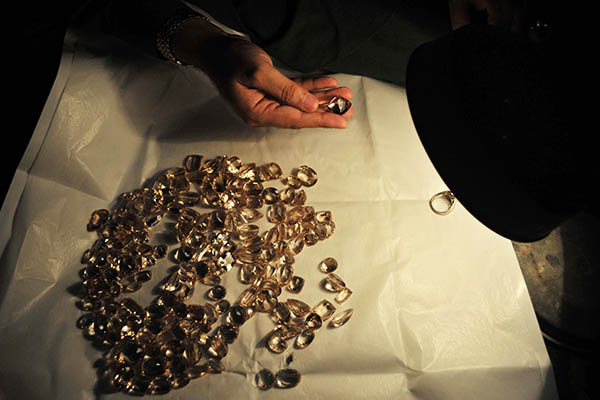 Traders in Peshawar say foreign buyers have stopped visiting them due to increasing Talibanization.

For 400 years the craftsmen and traders of Peshawar’s jewelry bazaar have cut, polished, set and haggled over precious gems dug from the rugged mountains of northwest Pakistan.

Pakistan’s gem and jewelry exports have boomed in recent years but Taliban violence, a crippling power crisis and outdated production methods are taking their toll in Peshawar, where traders say business has slumped alarmingly in the past 12 months.

As dusk settles over Peshawar, the stalls and narrow lanes of Namakmandi bazaar in the heart of the city bustle with activity. Traders peer beadily to check the quality of emeralds, rubies and lapis lazuli, plying customers with green tea while food vendors roam about, the aroma of spices scenting the air.

But traders like Shehzad Sabz Ali say business is collapsing, and foreign buyers in particular have been scared off—a major problem in a sector where exports account for 95 percent of the market. “I have been in this business for the last 25 years but the slump that we are witnessing these days because of unrest and Talibanization is unprecedented,” he said.

The buyers from the United States, Thailand, France, Germany and Dubai who once thronged the packed market are largely a thing of the past. “The bomb blasts and suicide attacks have turned our businesses upside down, leaving us no option but to interact with our buyers through the Internet,” Ali said as employees in his small shop cut and polished delicate rose-pink kunzite stones.

Online dealing may be the thing of the moment, but traders like Ali, whose businesses have been built on generations of salesmanship and personal relationships, feel it is ineffective. For fellow trader Sheharyar Ahmad, the solution is to hold more trade shows in Pakistan’s other cities.

“I have attended a few exhibitions in Islamabad and Lahore where foreign buyers showed great deal of interest in the stones such as emerald, ruby and sapphire,” he said.

The reserves of precious and semi-precious stones in Pakistan are worth trillions of dollars, according to Peshawar-based gemologist Ilyas Ali Shah. But much of this potential remains untapped as the stones lie buried in the seven restive tribal areas along the Afghan border, where militancy and poor infrastructure have restricted access.

“Pakistan could triple its current gemstone exports if these reserves are fully tapped,” he said.

While the quality of stones from Pakistan is good and they sell well at international trade shows, Peshawar trader Sheharyar Ahmad said, the primitive cutting and polishing techniques are not up to international standards. “That is why when our stones go to Thailand, they are re-faceted and polished again,” he said.

Shah, who heads the Gem and Jewelry Training and Manufacturing Center in Peshawar, said the manual equipment Pakistani traders are still using did not allow the same precision and delicacy of workmanship as modern machinery. His training center aims to bring Pakistani jewelry techniques up to date.

“Our institute has been set up to train traders in cutting and polishing of gemstones through scientific means and we have so far trained over 1,000 students in Peshawar,” he said.

The government-run Pakistan Gems and Jewelry Development Company (PGJDC) is also trying to raise skill levels to allow the country to compete better with the likes of Thailand and India. Gem and jewelry exports have risen enormously in recent years to stand at $1.3 billion in 2013, and PGJDC general manager Khalid Aziz said they were aiming for a target of $1.7 billion by 2017.