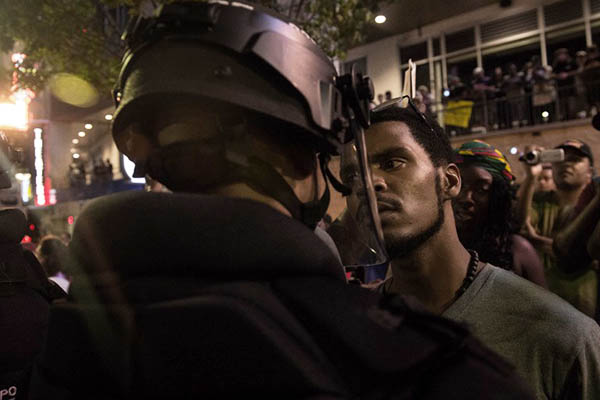 A second night of race-related clashes in Charlotte, North Carolina on Wednesday left one protester on life support, with the renewed violence prompting the governor to declare a state of emergency.

Governor Pat McCrory said on Twitter that along with declaring the state of emergency, he was activating the National Guard and Highway Patrol officers to assist local law enforcement. “We cannot tolerate violence. We cannot tolerate the destruction of property and will not tolerate the attacks towards our police officers that are occurring right now, and I feel very strongly about that,” the governor later told CNN. “That is not the American way.”

Several hundred people taunted riot police on Wednesday night amid clashes in the city center, a second night of unrest ignited by the fatal police shooting of a black man. A protester was critically wounded and on life support, the city said, after earlier reporting that the person had died.

Authorities had said the protester was shot by a civilian, adding that police did not open fire. An AFP reporter at the scene of the protests outside the Omni Charlotte hotel saw a man who was apparently shot falling to the ground, bleeding heavily.

Some demonstrators banged on windows, others stood on cars and threw objects at police. Police fired what appeared to be tear gas, sending the protesters scattering. “We are working to bring peace and calm to our city. We know this is not who Charlotte is,” Mayor Jennifer Roberts said on CNN, calling on people to stay home and off the streets. “Tell everyone that violence is not the answer,” she said.

Roberts added that authorities would consider other options if violence continues to flare, “possibly curfews and that sort of thing, but right now, we are continuing to work with what we have tonight.”

Keith Lamont Scott, 43, was shot dead in an apartment complex parking lot on Tuesday after an encounter with officers searching for a suspect wanted for arrest. Sixteen officers and several demonstrators were injured in clashes overnight Tuesday following Scott’s death, the latest in a string of police-involved killings of black men that have fueled outrage across the United States.

Charlotte police tweeted that four officers were hurt during the second night of unrest Wednesday night, but said none of the injuries were considered life-threatening.

Before Wednesday’s protest, presidential candidates Donald Trump and Hillary Clinton weighed in on the violence in Charlotte, which came on the heels of another fatal police shooting of a black man, Terence Crutcher, on Friday in Tulsa. “Keith Lamont Scott. Terence Crutcher. Too many others. This has got to end. -H,” tweeted Democrat Clinton, signing the post herself.

After calling to “make America safe again” in a tweet, Trump suggested later Wednesday that the Tulsa officer who shot Crutcher had “choked.”

“I don’t know what she was thinking,” the Republican said, speaking at an African-American church in Cleveland, Ohio.

The Charlotte shooting took place at 4:00 p.m. on Tuesday as officers searching for a suspect arrived in the parking lot of an apartment complex. They spotted a man later identified as Scott, who they said was holding a handgun as he exited and then re-entered a vehicle, Charlotte-Mecklenburg police chief Kerr Putney told journalists.

Officers approached the man and loudly commanded him to get out and drop the weapon, at which point Scott exited the vehicle armed, according to police. “He stepped out, posing a threat to the officers, and officer Brentley Vinson subsequently fired his weapon, striking the subject,” the police chief said.

However, Putney added that he did not know whether Scott “definitively pointed the weapon specifically toward an officer.”

Scott’s relatives told local media that he was waiting for his young son at school bus stop when police arrived. He was not carrying a gun but a book when he was shot dead, they said—an account police disputed. “I can tell you a weapon was seized. A handgun,” Putney said. “I can also tell you we did not find a book that has been made reference to.”

Anger was simmering in Charlotte earlier in the day, especially over the police chief’s assertion that Scott had been armed. “It’s a lie,” said Taheshia Williams, whose daughter attends school with the victim’s son. “They took the book and replaced it with a gun.”

Earlier on Wednesday evening, several hundred angry protesters, mostly African American, marched to the Charlotte police headquarters. Some chanted “No Justice! No Peace!” while others banged on the door. A young boy held a sign saying “My life matters.”

Mike Smith, 27, a marketing manager in Charlotte, said frustration has been building in the local black community. “These tensions, they popped yesterday and this is the outcome,” he said.

The 40-year-old is seen with his hands up, appearing to comply with police officers before he is shot once by officer Betty Shelby and falls to the ground. Another officer fires his stun gun.

The U.S. Department of Justice said Monday it would conduct a federal civil rights probe into the Tulsa shooting, parallel to an investigation being carried out by local authorities.