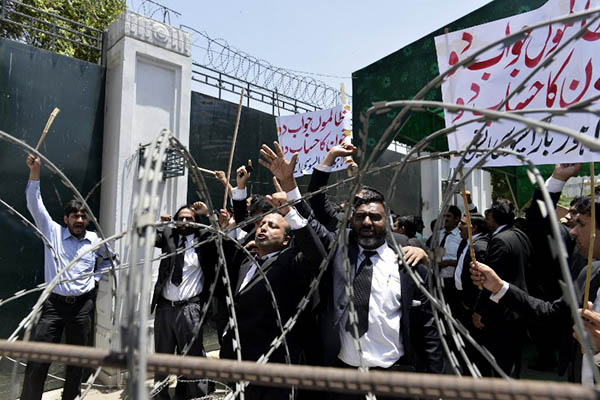 The shooting of two lawyers in Daska, and subsequent rioting, must be analyzed at both the immediate and broader levels to properly resolve the situation.

While the groundswell of lawyers protesting against police high- and ham-handedness has somewhat subsided, perish the thought that the issue has been resolved, official investigations into the incident notwithstanding.

Attitudes remain entrenched. The lawyers want ‘justice’ (read: revenge) for the killing of two of them. The police high-ups are already working feverishly to find some way out for the station house officer who fired at the lawyers. Their defense: the SHO is a good officer with an impeccable record, one odd man’s death in custody more a professional hazard than an issue that should unnecessarily vex non-police minds, thank you.

Meanwhile, the fact that one of the slain lawyers, Rana Khalid, had an impressive criminal record is, of course, a matter that must be kept in mind and cannot be brushed aside as actions in the line of duty.

In an earlier article on the issue I had argued that the incident’s illogic, as also the lawyers’ behavior, cannot be understood in modern terms, least of all in and through, for instance, the idea of institutions as understood by New Institutional Economics. Its primeval nature reflects a tribal mentality.

That said, live as we do in the 21st Century, it does behoove us to realize that such tribalism cannot be shrugged of and must be studied as well as rectified. What makes the phenomenon interesting is the fact—Ferguson riots being a case in point—that the expression of this tribalism is not just a function of medieval societal attitudes. It can spring as easily in societies generally regarded as more evolved.

It does seem, though, that the sense of belonging to a community is a common factor in both expressions of ‘collective action’. What separates one from the other is the knowledge and acceptance that any sense of togetherness mustn’t cross the boundaries of the legal-normative way of doing things. In other words, collective action and mob rioting are separated by a thin line, what Umberto Eco in his Tanner Lecture described thus:

“Latin rationalism adopts the principles of Greek rationalism but transforms and enriches them in a legal and contractual sense. The legal standard is modus, but the modus is also the limit, the boundaries.

“The Latin obsession with spatial limits goes right back to the legend of the foundation of Rome: Romulus draws a boundary line and kills his brother for failing to respect it. If boundaries are not recognized, then there can be no civitas.”

This means that for civitas to have any meaning, there must be modus. As we have determined, the boundary distinguishes collective action, even peaceful protest, from mob rioting and that boundary is the legal standard. But what is important in terms of understanding the requirement of having that legal standard is the fact that without it there can be no civilized life and no organizing principle.

Evidently, the tribalism of the situation under discussion flies in the face of this basic and vital principle. From the lawyers who created a situation in violation of this principle to the police officer who pulled the trigger, the casualty is the modus without which there can be no civitas.

It is precisely for this reason that it’s important to analyze the event at two levels: the immediate and the broader. At the immediate level, one can take any of two positions: the SHO had no reason to open fire; the SHO, even if he did need to shoot, could have shot to injure. Or, an officer of the law was attacked, not once but twice. He was abused. His men had earlier been attacked. Another administration official had been manhandled by the lawyers. The lawyers were demanding that the administration do something, which it was legally unauthorized to do and so on. Do note that the lawyers constantly flouted other modi.

The first position would argue that no matter what, whether abused or manhandled, the SHO should not have shot to kill. That action, even if taken in the heat of the moment, cannot be justified. Without prejudice to it I will say that it’s biased toward a certain absolutism. But then I’d expose myself to the charge of flouting the very idea of modus that I have used to argue the case for legal boundaries.

It would be a fair charge. But it then raises the question of whether modus is a standalone principle, un-impacted by everything else—or what may be called extenuating grounds, another legal concept. Also, do note that the lawyers constantly violated other modi as has been determined. My nota bene would be that I am not giving a verdict here, merely asking certain questions. But I shall, nonetheless, submit that these questions epitomize a situation where clinging, hurriedly, to this or that position might blind us to its complexity.

At the broader level, this reflects our general disregard for Eco’s idea of boundaries. As I wrote in the previous piece, we like to break the law but we love to invoke it in our defense. The selective rationalism of this irrationality is what raises the cost of socioeconomic life in this country and binds us to a system which does not progress but only churns. It does not require very high IQ to determine the unsustainability of such a system. It can only regurgitate, never regenerate.