Unveiled Women Drivers in Iran to Have Cars Impounded 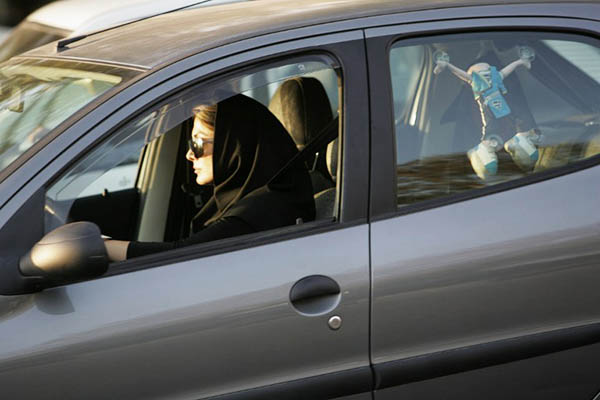 Under new rules, motorists breaking ‘social norms’ are also likely to be fined.

Iranian women who fail to wear the veil when driving will have their cars impounded for a week and are likely to be fined, police warned Sunday.

In the past week, about 10,000 motorists have received warnings, with 2,000 facing further action for breaking “social norms,” but the new measure to confiscate cars will come into force nationwide.

Deputy police chief Said Montazer-ol-Mehdi said officers had been authorized by prosecutors to take such steps. If traffic police spot an unveiled woman driver or passenger, “their car will be taken to a police compound for a week,” he said, according to the official IRNA news agency.

Some owners will be fined but other offenders will be referred to judicial authorities for further investigation, he added. The steps are part of a wider traffic police crackdown that could also see male drivers targeted for bad conduct.

Violations could include “removal of veil inside the car, driving recklessly, parading in the streets and harassing women,” IRNA said.

When in public, all women in the Islamic republic, including foreigners, are required to wear at least a hijab. Since the mid-1990s, however, there has been a gradual change in the dress code.

Many women wear stylish and colorful coats and headscarves and often tight trousers instead of the traditional one-piece, head-to-toe black chador.

Police patrols have continued campaigns to enforce the law and the authorities also use a network of “trustees” to identify transgressors. But in some upmarket neighborhoods of northern Tehran, a city of 12 million, it is not uncommon to see women’s scarves wrapped around their shoulders.

“A number of officials, army and government chiefs and covert police agents have been given access to a system set up to report the violations,” Montazer-ol-Mehdi said of the latest campaign. “These trustees will report the license plate of violators and the cars will be flagged for further investigation.”

Iran’s supreme leader Ayatollah Ali Khamenei accused fast-driving wealthy youngsters in April of creating “psychological insecurity” on the streets after two high-speed accidents killed five people. “I hear that young people from the generation of wealth, a generation intoxicated by their money, are driving luxury cars and parading in the streets, making the streets insecure,” he said, quoted by his website.