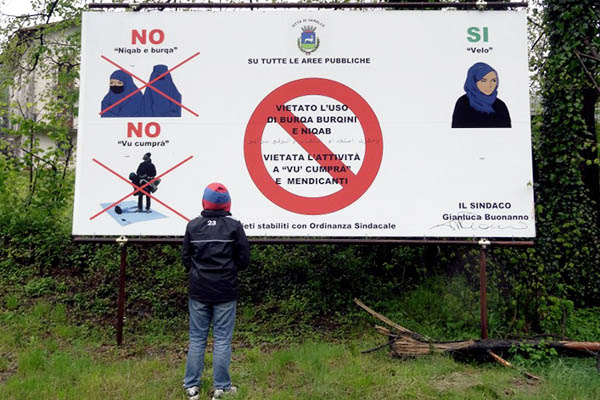 Cannes unveils ruling that restricts access to beaches to those wearing bathing apparel that ‘respects secularism.’

Anti-racism organizations and human rights groups vowed Friday to overturn a “deeply worrying” ban on the wearing of burkinis—full-body swimsuits—on the beaches of Cannes, the French Riviera resort famous for its annual film festival.

Cannes’ mayor David Lisnard signed off on the ruling that “access to beaches and for swimming is banned to anyone who does not have [bathing apparel] which respects good customs and secularism,” which is a founding principle of the French republic.

SOS Racisme attacked what it said was the mayor’s “strategy of tension.” An umbrella organization of groups against Islamophobia, the CCIF, said it was “deeply worried” about the ban, which it viewed as “a new attack on the most basic principles of law.”

It said it was planning to oppose the ban in the courts.

The ban also came under fire from the Socialist Party, who are in opposition to the center-right Republicans who control Cannes. The local Socialist branch said the burkini ban was an attempt at grabbing headlines, which would “play into the hands of religious fundamentalists.”

Thierry Migoule, head of municipal services in Cannes, sought to clarify the intent of the burkini ban, which is in place until Aug. 31. “We are not talking about banning the wearing of religious symbols on the beach… but ostentatious clothing which refers to an allegiance to terrorist movements which are at war with us,” he said.

The issue comes at a highly sensitive time for relations with Muslims in France after two attacks last month linked to the Islamic State jihadist group. On July 14 the nearby Riviera city of Nice was the target of an attack claimed by I.S., which killed 85 people, when a truck ploughed into crowds celebrating Bastille Day. On July 26, a priest was killed in his church in northwestern France by two attackers who had proclaimed their allegiance to Islamic State.

Islamic dress is a hot-button issue in France, where the full-face veil is banned in public places. But there is no ban on wearing religious symbols or clothing.

Earlier this week a waterpark in Marseille, another city on France’s south coast, cancelled plans to host a private event for Muslim women wearing burkinis after they sparked outrage, including from politicians on both the right and left.

The event in the suburb of Pennes-Mirabeau was the brainchild of Smile 13, a women’s association catering for Arabs in Marseille, whose population of nearly two million includes around 220,000 Muslims, mainly of Algerian origin. Politicians on both the right and the left had slammed the plan as provocative, with left-wing senator Michel Amiel, who is also mayor of Pennes-Mirabeau, saying he would seek a ban.

I agree. Beaches are to swim and be free in the water. Why would burka clad women want to go in public places where others are scantily dressed? It doesn’t make sense at all. If you wear a burka, then you are essentially cutting yourself off from engaging in social behaviors like clubbing, swimming etc.
I seriously don’t understand the wearing of a full body bathing suit.

i agree to ur comment but i would never support Banning it. I dont like lots of things have to live with it can Banking things we dont like