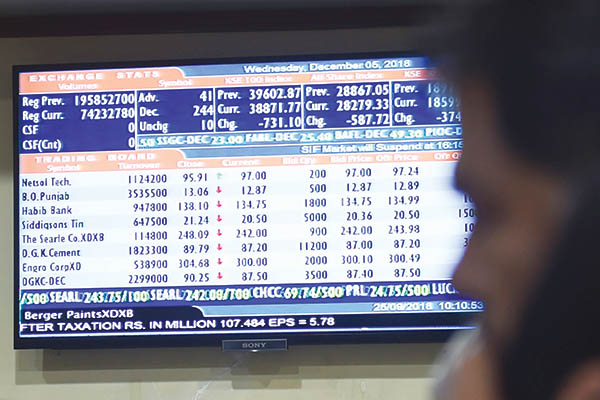 The year 2018 brought many changes for Pakistan—both good and bad. One of the better occurrences was a significant acknowledgment from the international community that the country’s security situation had improved sufficiently to make it an attractive prospect for investment once again. Coupled with the new Pakistan Tehreek-e-Insaf-led government, which has vowed to cater to businesses and encourage investment, the business climate has never looked better. Of course, this was coupled with the rupee going into freefall and a persistent balance-of-payments crisis that threatens to derail the economy. Decreasing foreign exchange reserves and increasing trade deficit certainly did not help ease concerns about where the country is headed. Here’s a round-up of some of the major occurrences to hit the business sector this year:

Royal Vopak Company, a Dutch company, has signed a share purchase agreement with Engro Corporation to acquire a 29% stake in the Elengy Terminal Pakistan Limited subsidiary of the Karachi-based multinational company. The $31.4 million deal, which results in ETPL shareholders now comprising Engro Corporation, Royal Vopak and International Finance Corporation (IFC), marks a significant inflow of foreign direct investment into Pakistan, with Engro promising to reinvest the sale proceeds in Pakistan’s economy. In addition to the 29% stake from Engro, Royal Vopak has also acquired 5% from IFC and is set to expand the stake further to 44%.

After a gap of 27 years, the world’s largest oil and gas company is set to re-enter the Pakistani market. In May, ExxonMobil acquired a 25% stake in offshore drilling. It has also registered a local partner in Pakistan and has obtained office space in federal capital Islamabad to ensure that its comeback is not considered a flash in the pan. Once these projects are underway, they could provide employment to hundreds of Pakistanis, according to company CEO Irtiza Sayyed.

Volkswagen, the largest automaker by worldwide sales in 2016 and 2017, has signed a final agreement with Pakistan Premier Motors to manufacture and assemble commercial vehicles at a completely knocked down assembly plant in Karachi. According to VW, the project is expected to generate a maximum of €500 million annually in exports and €200 million in duties and taxes for Pakistan, suggesting the company plans to export vehicles manufactured in Karachi to other countries in the region. If the announced projects proceed as planned, they should generate 5,400 jobs with 1,400 direct ones.

Or is Japan more your speed?

Nissan Motor Company Limited, a Japanese multinational automobile manufacturer, announced its return to the Pakistani market after an earlier failed attempt. Signing a deal with Ghandhara Nissan Limited, it announced local manufacturing of Nissan cars, especially the Datsun model, with the hopes of creating 2,000 jobs in Karachi. For its part, Gandhara will invest Rs. 4.5 billion over the first four years into the project.

Al-Futtaim Automotive International announced that it would set up an automotive plant in Faisalabad to manufacture and assemble Renault vehicles in Pakistan. Once completed, the assembly plant will have a total installed capacity of over 50,000 units per annum with production expected to commence in 2020. The company has said it will invest $140 million in Pakistan as part of the deal.

PepsiCo, Inc. has announced that it will invest $1 billion into the Pakistani food and beverage market over the next five years. The global snack and beverage company is currently set to open a $66 million snack manufacturing facility in Multan next year. According to the company, the plant will create over 1,500 direct and indirect job opportunities.

Pakistan’s national currency took several hits this year, ending at around Rs. 140 to the U.S. dollar after seven rounds of devaluation between July and December. The sharp drops—the rupee started the year at Rs. 110/USD—caused much concern within the government, with officials scrambling to justify the fallout as inevitable self-correction to make up for the previous government’s decision to keep it overvalued.

The State Bank of Pakistan in November announced a 150 basis points increase in the discount rate, bringing it to 10%, against the 5.75% it stood at in January 2018. According to the central bank, Pakistan’s fiscal deficit, rising inflation and low foreign exchange reserves are the key challenges facing the country’s economy. Analysts predict this will further boost the inflation rate, already at a 50-month high.

Saudi Arabia, following a visit by P.M. Khan, has offered a $6 billion bailout package for Pakistan’s ailing economy. Reportedly, the package comprises $3 billion balance-of-payments support and $3 billion in deferred payments on oil imports. In addition, per statements from government officials, the Saudi Crown Prince is eager to invest in Pakistan and has pledged to offer further support in 2019.

In June, Pakistan was officially placed on the Financial Action Task Force (FATF) ‘grey list,’ effectively designating the country’s financial system as a risk to international finance due to “strategic deficiencies” that prevent terror financing and money laundering. This poses great risks for Pakistan’s economy, as a ‘grey’ listing usually means a decrease in foreign investment and makes it more difficult to secure foreign loans.