Upstaged at The Hague 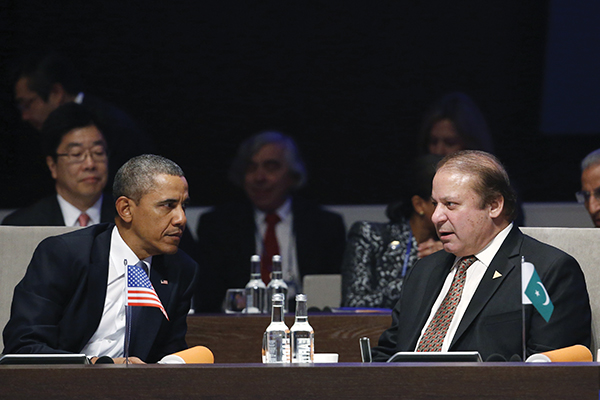 At the 53-nation, two-day Nuclear Security Summit 2014, held at The Hague, Prime Minister Nawaz Sharif made Pakistan’s case for inclusion in the Nuclear Suppliers Group, for international intervention to unknot the Kashmir issue, for acknowledgement of its nuclear-safety record, and for foreign investment. However, his speech and those of other leaders were upstaged by Russia’s ongoing tensions with the West ever since Moscow redrew the world map by annexing Crimea from Ukraine. On March 24, British Prime Minister David Cameron announced the G8 summit scheduled for Sochi, Russia, as cancelled. Instead, a G7 conference will now be held in Brussels. Russia, which joined the-then G7 in 1999, called this move “no great tragedy.” Sergei Lavrov, Russian foreign minister, said: “If our Western partners think that this format [the G8] has outlived itself, then so be it.”

Prime Minister Nawaz Sharif’s extraordinary diplomacy at the nuclear security summit was greatly appreciated at The Hague.His address at this vital conference has been greatly highlighted and widely discussed among the delegates at the summit. After the revival of the strategic dialogue between Pakistan and the United States, the Obama administration has also warmly received Pakistan for highlighting the importance of the democratic government in the country.

Pakistan’s PM is right in the sense that it is necessary to keep balance of power between two hostile neighbors in South Asia. P5 states have been discriminatory towards Pakistan’s nuclear program and its access to NSG. India has given a waiver irrespective of its non-signatory to NPT whereas Pakistan has been treated as rogue state. This discrimination should be ended as soon as possible in order to strengthen nuclear ties with Pakistan. Pakistan has played vital role in securing its nukes and developed a foolproof security over its nukes.

At Hague, Pakistan has well presented its commendable efforts for nuclear security at home. Its nuclear security evolved around five major pillars which is a product of day and night efforts of Pakistanis. The international community reflects its satisfaction and confidence on Pakistan’s efforts for nuclear security and terrorism in particular. It’s a fact that Pakistan knows very well that how to tackle with threats except than no one else. It also fulfills all the credentials to be at NSG. However, global disarmament is largely a matter of political decisions and major states powers interests.