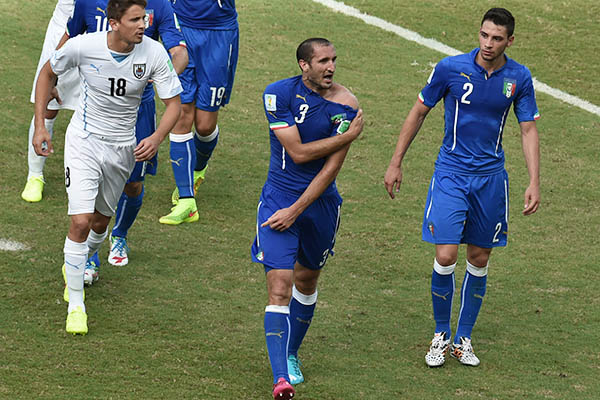 Luis Suarez has been banned twice before for biting opponents.

Uruguay star Luis Suarez faces expulsion from the World Cup for biting another player as FIFA confirmed it had opened disciplinary proceedings against him on Wednesday.

Suarez, banned twice before for biting opponents, appeared to sink his teeth into defender Giorgio Chiellini on Tuesday during Uruguay’s 1-0 win over Italy. Uruguayan players and team officials pleaded ignorance but the incident was captured clearly on television footage, making a ban almost inevitable.

“FIFA can confirm disciplinary proceedings have been opened against the player Luis Suarez,” FIFA said in a statement. Suarez and the Uruguayan Football Association can submit evidence to investigators until 5:00 p.m. on Thursday, FIFA added.

Suarez, who plays in the English Premier League for Liverpool, is one of the world’s biggest stars, and could be banned for up to 24 games under FIFA rules. He has already received long bans for biting during his club career as well as racially abusing Manchester United player Patrice Evra during a game in 2011.

The latest flashpoint occurred towards the end of Uruguay’s Group D game with Italy. Replays showed Suarez appearing to bite Chiellini’s shoulder as the two players made contact in an off-the-ball incident.

Chiellini angrily remonstrated with Mexican referee Marco Rodriguez, pulling his shirt off his shoulder to show red marks on his neck. Afterwards a disgusted Chiellini told Italian television: “He bit me, it’s clear, I still have the mark.”

“The referee should have blown his whistle and given him a red card,” he added.

Suarez sought to play down the incident in comments to Uruguayan television, claiming Chiellini had barged him. “There are things that happen on the pitch and you should not make such a big deal out of them,” Suarez said.

However, the Italian press didn’t spare him on Wednesday with several of the daily newspapers displaying a photograph of Chiellini’s bare shoulder with the alleged marks. La Stampa made much of how the team had been drained of life by not only Suarez but also the referee Marco Rodriguez who sent off midfielder Claudio Marchisio in the second-half.

“In the tussle with vampires we have been drained of blood,” it wrote. “Italy has collided with the teeth of Suarez and a red card handed out by a referee nicknamed Dracula.”

The English press was only too pleased to be presented with the equivalent of an open goal by Suarez, who only days before had scored twice to beat England 2-1 and then take a swipe at them for not showing him the respect he merited. Tabloid The Sun, however, pointed out that those very same journalists he was accusing had voted him player of the past season for his 31 goals for Liverpool.

The Times’s award-winning sports columnist Matthew Syed wrote that unless Suarez—who is rumored to be eyeing a move to Real Madrid—was severely punished, football would be the loser. “There is a case for a lengthy worldwide ban that sends an unmistakable signal that talent can never justify the kind of behavior that, in other circumstances, might bring a man before a judge for common assault,” he wrote.

If found guilty, the incident means the end of the tournament for Suarez, lambasted during the 2010 World Cup for his goal-line handball which denied Ghana what would have been a quarter-final victory.

Coaches and former players joined in the chorus of disapproval. “This is behavior that’s happened two times [before]. You cannot justify it. I seriously think he needs help,” said Everton manager Roberto Martinez after the latest Suarez transgression.

Former England star Chris Waddle, who was a member of the England squad at the 1986 World Cup finals that experienced the ‘Hand of God’ goal by another South American bad-boy Diego Maradona, told the BBC there was no excusing his behavior. “There will be people who will defend him, but I don’t know why. I’d make him wear a gum-shield,” said Waddle.

The biting storm dominated the headlines on Tuesday after Uruguay downed Italy 1-0 to advance to the last 16 and which resulted in the losing side’s coach Cesare Prandelli resigning.

While the South American pantomime villain awaits his fate the golden-boy of the continent, Lionel Messi, will hope to celebrate his 27th birthday a day late with another eye-catching performance for Argentina against Nigeria later on Wednesday.

Nigeria, though, will be seeking to make up for the disappointment of the Ivory Coast’s elimination and give Africa something to smile about with a draw probably being good enough for them to progress. However, a heavy defeat and an Iranian win over pointless Bosnia-Hercegovina could cost the African champions their place in the last 16.