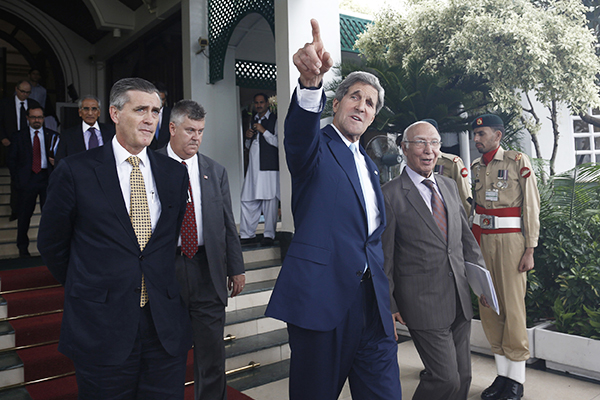 The United States and Pakistan resume talks next week after a three-year hiatus as they seek stability in often turbulent ties amid mutual concerns over Afghanistan’s future.

Pakistan and the United States started a “strategic dialogue” in 2010 to work through their complicated relationship, but the talks were quickly frozen due to repeated crises—including over the secret 2011 U.S. raid that killed Osama bin Laden.

Secretary of State John Kerry, who announced a resumption of the talks during a visit to Islamabad in August, will hold the dialogue Monday in Washington with Sartaj Aziz, Prime Minister Nawaz Sharif’s national-security and foreign policy adviser.

A U.S. official said that the talks would look at both security and economic cooperation and seek to build a “blueprint” for future ties. “Having seen the highs and lows of this relationship,” the official said on condition of anonymity, “both countries have put an enormous amount of effort into assiduously putting this relationship on firmer grounding over the last year and a half.”

The United States, which formed an uneasy partnership with Pakistan after 9/11 is seeking Islamabad’s assistance again as it pulls tens of thousands of troops from Afghanistan this year and Washington ends its longest-ever war.

U.S. President Barack Obama’s administration has grown frustrated as Afghan President Hamid Karzai holds off on signing a security agreement that would allow a smaller number of troops from the United States and the rest of the NATO alliance to stay in a support role.

“I think our analysis and Pakistan’s analysis are pretty much the same—that an abrupt termination in the NATO and American presence there would be destabilizing, would incentivize the Taliban and other militant groups, and would demoralize significant elements of the population,” another U.S. official said.

Since coming to power last year, Sharif has notched down Pakistan’s often strident tone that had grated on U.S. officials. In a meeting with Obama in October, Sharif pledged to work for better relations with Afghanistan and historic rival India. But whatever his intentions, Sharif may face limits in assisting the United States. Opposition supporters led by former cricketer Imran Khan have blocked a key trucking route into Afghanistan. Pakistan has also been torn by internal violence. More than 400 Shia Muslims were killed in targeted attacks last year with Sunni extremists enjoying virtual impunity, according to a recent Human Rights Watch report.

Sharif is seen in Washington “as potentially a strong partner because he has a strong political position, which was not the case with the previous government,” said Shuja Nawaz, director of the Atlantic Council’s South Asia Center. “But whether he will be considered a real strong partner will really depend on how much he can deliver in terms of improving and stabilizing the conditions inside Pakistan and then helping the U.S. stabilize the situation in Afghanistan.”

Nawaz said that Pakistan will likely be looking for a solution on joint operation of drones. The unmanned U.S. aerial attacks on Pakistani territory are deeply unpopular with the public and have become a major source of friction.

Pakistan also has staunch critics in the U.S. Congress, which recently voted to withhold $33 million in aid until the release of Shakeel Afridi, a doctor imprisoned for helping the CIA track down bin Laden. In a new study, Daniel Markey of the Council on Foreign Relations said that Congress should keep the current level of about $400 million in annual defense assistance to Pakistan but link it to improvements in internal security instead of the Afghan war.

Markey called for Pakistan’s integration into the U.S. “rebalance” toward Asia, saying that the Obama administration’s professed new regional focus has led to feelings of abandonment in Islamabad. Among other ideas, Markey called for the United States to negotiate preferential access for goods from Pakistan, India, and Afghanistan—a three-way deal that would help improve Islamabad’s relations with its neighbors.

I tend to agree with Shuja Nawaz that “Sharif is seen in Washington “as potentially a strong partner because he has a strong political position, which was not the case with the previous government,” said Shuja Nawaz, director of the Atlantic Council’s South Asia Center.

Shuja Nawaz’s comments smells of uncertainty about Nawaz Sharif’s capacity to deliver what’s expected of him at home and across the borders when he says:
“”But whether he will be considered a real strong partner will really depend on how much he can deliver in terms of improving and stabilizing the conditions inside Pakistan and then helping the U.S. stabilize the situation in Afghanistan.” That uncertainty is well-founded and still looms large at home and abroad. Nawaz Sharif is still unable to put up faces in his cabinet and elsewhere in key positions to prove that he is well-prepared to do what he promised at home and abroad before the general elections.