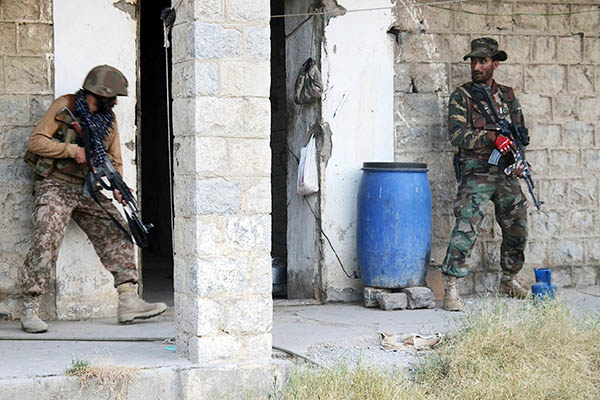 Jets bombed militant hideouts in North Waziristan on Saturday, killing scores of Uzbek and local insurgents in a massive ongoing offensive against the Taliban, the military said.

According to a senior military official who spoke on condition of anonymity as he is not authorized to speak to media: “At least 15 of the militants killed were Uzbeks.” He also confirmed that the terrorist hideouts had been razed in the airstrikes.

However, local sources told Newsweek there were no Uzbek militants left in North Waziristan. Speaking on condition of anonymity, one tribesman said: “As soon as the government announced that it was initiating the military offensive, all the Uzbek militants [in Miranshah] fled to Afghanistan.” He said there had been no Uzbek presense since. “I have not witnessed any Uzbek movement in North Waziristan since Zarb-e-Azb started,” he added.

The Islamic Movement of Uzbekistan (IMU), an Al Qaeda affiliate, has had a large presence in Pakistan’s tribal belt since the U.S.-led invasion of Afghanistan in 2001. Last month Pakistan’s military launched a long-awaited offensive in North Waziristan, aimed at wiping out longstanding militant strongholds in the area, which borders Afghanistan. More than 500,000 people have fled the area with tens of thousands of families have leaving for the town of Bannu, close to North Waziristan.

Jets and artillery began hitting militant targets on June 15 to try to regain full control of the district after years of pressure from Washington and other powers. The assault was finally launched after a dramatic attack on Karachi airport, which killed dozens of people and marked the end of a faltering peace process with the Pakistani Taliban.

So far, 386 militants and 20 soldiers have been killed in the offensive, according to the military, though with the area off-limits to journalists the number and identity of the dead is impossible to verify.

Separately on Saturday, a Pakistani solider was killed by an improvised explosive device during a clearance operation after the airstrikes, the military said.