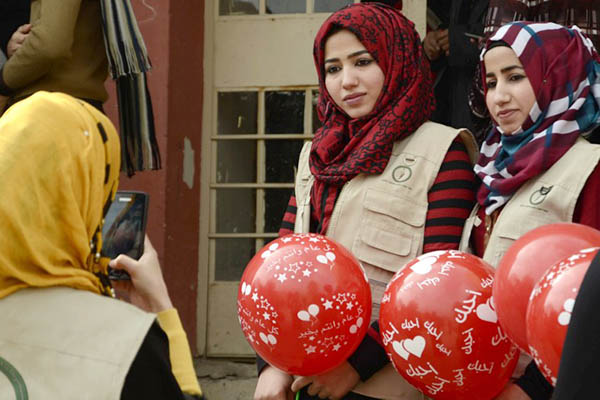 Valentine’s Day returned on Tuesday to the eastern sector of the Iraqi city of Mosul from where the Islamic State group was expelled last month, at least for a group of enthusiastic schoolchildren.

“My feelings for you flow like a river, and will flow on for the rest of my life,” young volunteers recited in front of the children at one school, as plastic roses, balloons and heart-stickered pens were handed around. In a celebration of “love for our liberated city,” multi-colored confetti was scattered across the floor and in the children’s hair, as they awaited the arrival of a big cream cake.

“This Feb. 14 will be unforgettable!” was the verdict of schoolgirl Manal. “I knew there was an event that celebrates love but this is the first time I’ve had the chance to take part,” said the girl with honey-colored eyes lined with black kohl, framed by a traditional niqab covering the rest of her face and hair.

Nour, aged 14, was equally enthralled. “To hold a feast with girls and boys in the same room, with music, simply to have fun, this was unthinkable just a few months ago,” she said.

Organizers of the Mosul-style Valentine’s Day, however, remained on their guard, preventing children from venturing out into the courtyard of the Azzuhur school, whose name means flowers in Arabic.

Drones operated by the Islamic State jihadist group still overfly parts of eastern Mosul retaken by Iraqi forces. “Daesh has threatened to attack any schools which reopen. We’re not safe here. They can still reach us from the western bank [of the Tigris River dividing the city] or with suicide bombers,” warned Farid, a volunteer of the Nahdat Jeel (Rebirth Generation).

The group, made up of around 300 local young men and women aged between 15 and 30, was formed a month ago through contacts on social media, and it has set itself the task of cleaning up schools and hospitals, repainting public squares and planting trees. “We must get rid of all trace of Daesh, whether visible or symbolic,” said Rafal Muzaffar, 26.

The many slogans splattered on the walls to glorify the “caliphate” proclaimed by I.S. leader Abu Bakr al-Baghdadi from a Mosul mosque in 2014 at the start of the group’s two-year rule of the city have almost all disappeared. “We’re trying to carry out symbolic actions that provide a sharp contrast with what life was like over the past two years,” said Muzaffar, dressed in a long black tunic and yellow scarf.

Last week, the all-Muslim group worked on cleaning up a huge church nicknamed “The Titanic” because of its ship-like shape, “to show that in Mosul our differences are our strength,” she said.

Mohamed Namoq, one of Nahdat Jil’s founders, was jailed and tortured by I.S. for almost two months for having recited poems on the radio that the group deemed subversive. “Whatever the threats we face, nothing can stop us from carrying on and from shouting it out loud and clear, something we should have done long ago,” said Namoq.

Haneen, 17, is also determined to play a role in restoring life to Mosul. “All young people should take part, not only boys but girls as well,” she said.

As for celebrating Valentine’s Day, that was “magical, because how can you live without love?” she asked, while pointing out shyly—in deference to her conservative society—that she does not have a boyfriend.