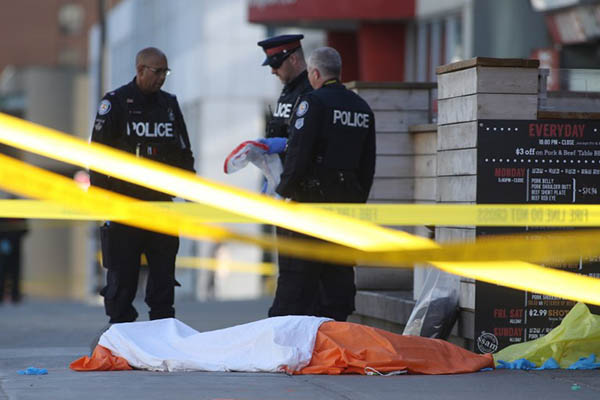 At least 10 people died after a man plowed a rental van into a crowd of pedestrians in Canada’s biggest city Toronto on Monday, in what police dubbed a deliberate attack.

The incident took place in broad daylight around 16 kilometers from a conference center hosting a meeting of G7 ministers, but officials said they had no evidence of a link to the event. “The actions definitely looked deliberate,” Toronto Police Chief Mark Saunders told journalists.

Ralph Goodale, the minister of public security, added that “on the basis of all available information at the present time, there would appear to be no national security connection to this particular incident.”

Police arrested a suspect at the scene—who they identified later as 25-year-old Alek Minassian from a northern Toronto suburb—of the attack, whose initial death toll of nine jumped to 10 after one person succumbed to injuries.

Fifteen people remained in hospitals throughout the city, Saunders said, adding that local, provincial and federal investigators were probing the case.

Two South Koreans were among the dead, a Seoul foreign ministry official told AFP, with another of its citizens seriously injured.

At the scene, at least three bodies could be seen under orange sheets and a long stretch of road was sealed off with police incident tape. The suspect and a police officer faced off, their guns drawn. The suspect eventually surrendered his weapon and was taken into custody.

Vehicle attacks have been carried out to deadly effect by extremists in a number of capitals and major cities, including London, Paris, New York and Nice.

Canada’s Foreign Minister Chrystia Freeland said the G7 meeting would continue as planned into Tuesday, with officials discussing ways to secure democratic societies from foreign interference. “The work of the ministers obviously goes on. This is a very sad day for the people of Toronto and the people of Canada,” she said.

Officers were called to the scene—on Yonge Street at the corner with Finch Avenue—around 1:30 p.m., police said.

A white rental van with a dented front bumper was stopped on the sidewalk of a major intersection, surrounded by police vehicles. “He was going really fast,” witness Alex Shaker told CTV television. “All I could see was just people one by one getting knocked out, knocked out, one by one,” Shaker said. “There are so many people lying down on the streets.”

Another witness, Jamie Eopni, told local Toronto television station CP24: “It was crashing into everything. It destroyed a bench. If anybody was on that street, they would have been hit on the sidewalk.”

Though the act seemed “deliberate,” officials did not identify a terror link.

Canada has only rarely been the scene of terror attacks. In October, a man stabbed a police officer in the western city of Edmonton before slamming his van into a group of pedestrians, hurting four people. And in Quebec in October 2014, a Canadian man ran over two soldiers in a parking lot with his car, killing one of them. The driver was shot dead by police when he attacked them with a knife.

In March 2016, a Canadian who claimed to have radical Islamist sympathies attacked two soldiers at a military recruitment center in Toronto.