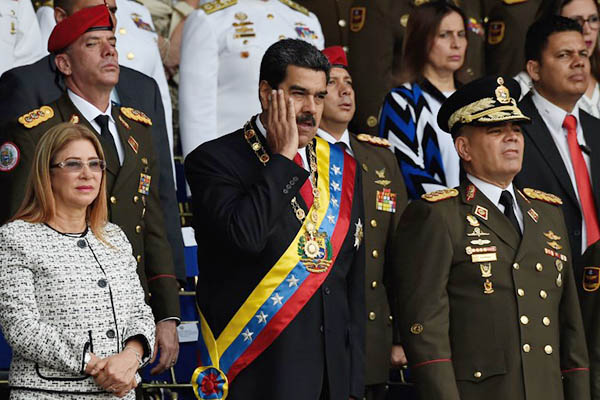 Venezuelan President Nicolas Maduro has pointed the finger at Colombia following the alleged assassination attempt on him during a military parade in Caracas at the weekend.

Early investigations, according to Maduro, also point to financial backers who live in the U.S. state of Florida. Meanwhile the Colombian government has put the blame at the door of “the ultra-right wing”—its term for the opposition.

Here is some of the reaction from countries around the world to Saturday’s incident:

Washington on Sunday denied any involvement in the alleged “assassination” attempt. President Donald Trump’s National Security Adviser John Bolton insisted there was “no U.S. government involvement” and even suggested that the incident may have been “a pretext set up by the regime itself.”

While denying any U.S. role, he said that if Venezuela had “hard information” of a potential violation of U.S. law, “we will take a serious look at it.”

Trump has been harshly critical of Maduro’s leftist regime, saying it has “destroyed a prosperous nation by imposing a failed ideology.” Last August, Trump alarmed Caracas by saying publicly that he could not rule out a “military option” to quell the chaos there.

Colombia also rejected Maduro’s “absurd” accusation of involvement. “It is absurd and unfounded to say that the Colombian President [Juan Manuel Santos] is responsible for the supposed assassination attempt on the Venezuelan president,” the foreign ministry said in a statement. “As usual, the Venezuelan president accuses Colombia for everything that happens. We demand respect for President Juan Manuel Santos, for the Government and for the Colombian people.”

The alleged assassination attempt came days after Santos told AFP that Maduro’s days are numbered and “that regime has to fall.”

Russia’s foreign ministry on Sunday condemned the “assassination attempt” on its ally Maduro. “We consider using terrorist methods as a tool for political struggles to be categorically unacceptable,” the statement said, adding “it is obvious that such actions are aimed at destabilizing the situation in the country.”

Moscow sided with Maduro’s regime after his government faced international isolation when close to 130 people were killed in anti-regime protests last year.

President Daniel Ortega’s office said the attack was the work of “obscure forces on the right, full of hate, trying to destroy the libertarian framework.”

Tehran decried “a step towards causing instability and insecurity in Venezuela.” This can only benefit “the enemies of the people and of the government of that country,” said Bahram Ghasemi, the Iranian foreign ministry spokesman.

Syria called for “respect of the country’s sovereignty and no interference in its internal affairs.” The foreign ministry in Damascus condemned “in the strongest possible terms the assassination attempt… which aimed at undermining the security and stability of the country.”

Spain’s foreign ministry on Sunday condemned “all kinds of violence used for political ends” and called for a peaceful, democratic resolution to the “serious crisis” in Venezuela.

Germany said it was “closely following developments on the ground,” while Portugal opined that the crisis in Venezuela could be overcome by “dialogue and national consensus” in line with “democratic principles.”

Last year, the European Union hit the Venezuelan vice-president and 10 other officials with sanctions over rights abuses and irregularities in the re-election of Maduro, which the bloc condemned as “neither free nor fair.”