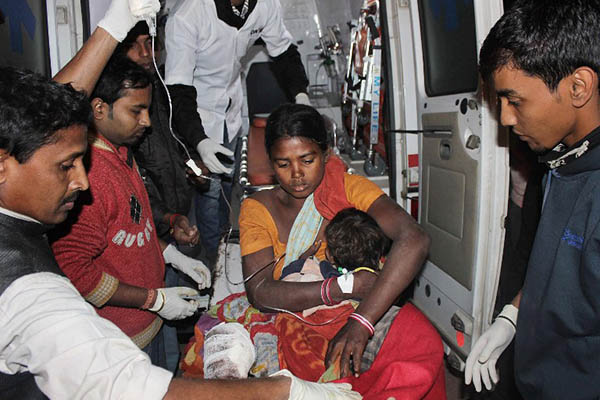 An injured woman and her child arrive at a hospital in Assam. AFP

At least 56 dead in series of attacks, attributed to the NDFP, across Assam state.

The death toll from a series of attacks by armed militants in remote northeast India has risen to 56, police said Wednesday.

Witnesses said militants pulled villagers from their homes and shot them at point-blank range in a series of coordinated attacks in Assam state late Tuesday. The state’s chief minister said children were among the dead, and that those responsible would not be spared.

“This is one of the most barbaric attacks in recent times with the militants not even sparing infants,” said Tarun Gogoi. Police blamed the attacks on the outlawed National Democratic Front of Bodoland (NDFB), which has been demanding a separate homeland for decades.

“As of now 56 people are dead and 80 others are injured. At least 20 of them are in critical condition in hospitals,” said police inspector general S. N. Singh. “Our teams are still trying to reach the remote areas to see if there are more bodies lying in houses or forests.”

“I saw my wife and two sons being shot dead before my eyes,” said Anil Murmu, a 40-year-old survivor from the worst hit village of Phulbari where 30 people were killed. “I somehow managed to escape by hiding under the bed,” he said by phone.

Police said recent talks initiated by the national government with one faction of the NDFB might have provoked the attacks. Some hardliners within the group opposed negotiations.

Prime Minister Narendra Modi condemned the attacks as an “act of cowardice” and said India’s home minister would travel to Assam state to assess the situation.

Earlier this year, about 10,000 people fled their homes when violent clashes over a border dispute left more than 45 people dead. In 2012, ethnic clashes in the same area in Assam claimed about 100 lives and displaced more than 400,000 people.