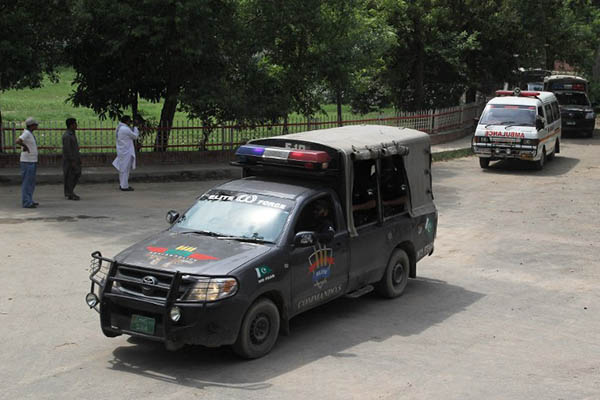 Angry protests flared into violence at the funeral for Lashkar-e-Jhangvi chief Malik Ishaq, officials said Thursday, as at least two people were killed in an apparent reprisal attack on a police checkpost.

Ishaq, whose extremist group has been accused of numerous bloody attacks on minority Shia Muslims, was killed in a shootout with police in the early hours of Wednesday, along with 13 fellow militants. Police said violence broke out in Ishaq’s hometown of Rahim Yar Khan when the bodies arrived for burial late on Wednesday evening.

Mastoi said police flooded the streets with around 5,000 officers and brought the disturbances under control.

Hours later, a group of around 10 militants attacked a police post in an eastern part of Punjab province, sparking a gun battle that left two attackers dead and two policemen seriously wounded.

Malik Mansoor, a senior police official in Gujrat district, said LeJ members armed with guns and hand grenades attacked the post apparently to avenge the killing of Ishaq and other senior commanders. “One of the killed militants has been identified as Muhammad Mumtaz, who is a long-time activist of LeJ and was wanted in several cases of targeted killings,” he said.

Wednesday’s shootout appears to have wiped out much of the top leadership of LeJ, a driving force in a rising tide of violence targeting Shia Muslims, who make up around 20 percent of Pakistan’s 200 million population.

Under Ishaq’s leadership, LeJ claimed responsibility for some of the bloodiest attacks on Shias in Pakistan’s recent history, including two suicide bombings in Quetta in early 2013 that killed more than 180 people.

Ishaq, who had been in and out of police custody in recent years, was arrested on Saturday and was being moved when loyalists attacked the convoy in Muzaffargarh. Those killed with him reportedly included Ghulam Rasool Shah, a hardline LeJ chief who acted as the group’s leader when Ishaq was behind bars.

Wednesday’s killings were the latest blow to militancy in Pakistan, where in the past year authorities have cracked down hard on the myriad insurgent groups that have plagued the country for a decade. The offensive intensified after Taliban gunmen slaughtered more than 130 children at a school in the northwest in December.