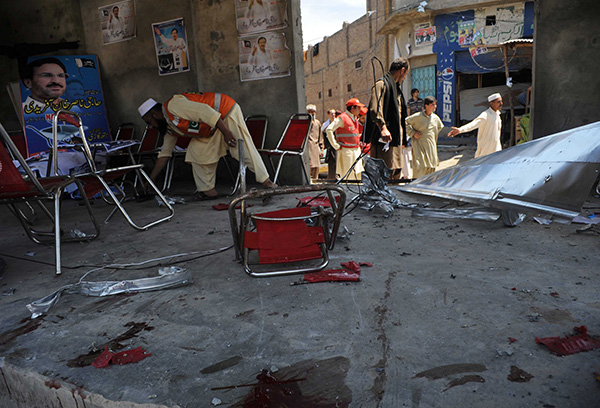 The Awami National Party in Pakistan’s Khyber-Pakhtunkhwa province is bearing the brunt of Taliban violence ahead of the May 11 elections.

Attacks by the Pakistani Taliban are forcing the main party in the country’s restive northwest, an important battleground in the 2013 general elections, to campaign in the shadows.

The Awami National Party ruled Khyber-Pakhtunkhwa province for the past five years, and was part of the ruling coalition at the center, but it is now bearing the brunt of a wave of Taliban violence as the country heads toward the May 11 general elections.

The militant Tehreek-e-Taliban Pakistan faction has vowed to target the country’s three main secular parties that formed the outgoing national government—the ANP, the Muttahida Qaumi Movement, and the Pakistan Peoples Party of President Asif Ali Zardari—while informing the Pakistan Muslim League (Nawaz), Pakistan Tehreek-e-Insaf and various Islamist parties that they did not face a similar threat.

More than 50 people have been killed in shootings and bombings on political targets since April 11, and around half of the deaths have come in attacks targeting the ANP.

Ghulam Bilour, a leading figure in the ANP who had been granted a temporary reprieve from the Taliban after he announced blood money for the creator of a blasphemous YouTube movie, narrowly escaped with his life on April 16. A suicide bomber targeted his car in Peshawar, killing 16 people. However, since the Taliban assassinated his younger brother Bashir, the No. 2 in the provincial government, in December, Ghulam Bilour has continued his fight and is determined to carry on. “Every day I think I might not make it home at night. But I am a Pakhtun: I’ll face death and won’t surrender,” he said.

But in the face of Taliban threats, the ANP has abandoned large meetings and only meets activists and supporters in small, secure places. Its coalition partner, the PPP, has also opted for a similar strategy. Haroon Bilour, Bashir’s son and a candidate for the provincial assembly, says the threats have hampered the party’s ability to campaign. “Our hands and feet are tied and we are supposed to run a marathon,” he said.

His rivals from the conservative right—religious parties and ex-cricketer Imran Khan’s Pakistan Tehreek-e-Insaf party—already boosted by a desire for change among voters, have had no problem organizing large meetings. Haroon complained that his rivals “are not even condemning Taliban attacks against us.”

The Taliban are opposed to secular democracy in principle, viewing it as incompatible with Islamic beliefs, and their dislike of the PPP, ANP, and MQM was intensified by the federal government’s backing of military operations against militants in the northwest.

Even in its traditional stronghold Peshawar, the ANP has suffered the pains of incumbency: judged to be incapable of stopping Taliban violence and held responsible for the rampant inflation and crippling power shortages that make ordinary voters’ lives a misery. Its strong stance against the Taliban and association with military offensives have also led to the ANP being accused of being too “pro-American”—electoral poison in a country where anti-U.S. feeling runs high following a controversial drone program that has left hundreds of civilians dead in the past five years.

The party has a fight on its hands, but the threat of violence has forced Haroon to order his activists to mount a low-key campaign. “Go door to door in small groups. And go at night. And focus on evening, late night because people are home. Ask them if there is any complaint, and if so I’ll go and meet them personally!” he told them at a meeting in the gardens of the Bilours’ heavily-guarded Peshawar home. This reflects his father’s policy, who he says never missed a single reception in Peshawar, sometimes going to 12 weddings in a single day.

“Being present, coming to receptions and weddings, is very important for people and voters. Bilour supporters know that if there is a problem, Bilours are there,” a local journalist explained.

Haroon’s colleague Mian Iftikhar Hussain, another ANP leader, has also been reduced to pacing like a caged lion in the party headquarters in Peshawar, because the threats have stopped him campaigning for reelection even in his home town of Pabbi.

Hussain’s rival in Pabbi, Khaliq-ur-Rehman of the PTI, is doing well with a plan promising to eradicate hepatitis C and his calls for dialogue with the Taliban. The attacks on the ANP do not move him. “Death threats are the consequences of what they did and said since five years. They should have been more careful. They promised to bring peace, but it’s not our war,” he said, echoing a common complaint that Pakistan has become embroiled in an American fight against Islamist militants.

But where Hussain and most of the rest of the ANP candidates are fighting the elections with one hand tied behind their backs, the Bilours at least have the local strength of the family name to fall back on.

Ghulam faces Imran Khan, the rising star of Pakistani politics, as he seeks reelection and the old campaigner has form for seeing off celebrity candidates—in 1990 he beat the PPP icon and former prime minister Benazir Bhutto.