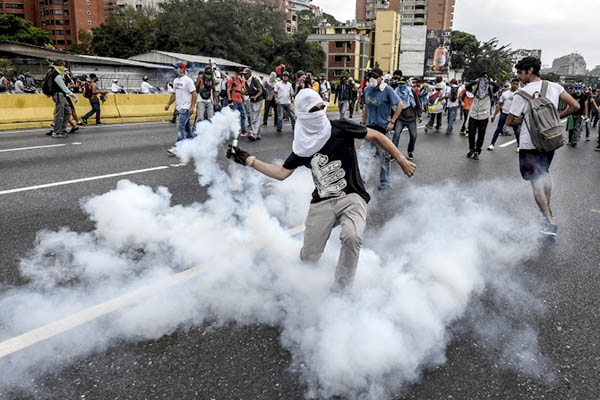 Venezuela, mired in a political and economic crisis for months, has been rocked by violence over the past three weeks, which has claimed 20 lives. Dozens of people have been injured and some 600 arrested since the crisis escalated in late March, according to the rights group Foro Penal. A chronology of key events follows:

March 29, 2017: Venezuela’s high court, which has consistently backed leftist president Nicolas Maduro, strips lawmakers of their immunity from prosecution, clearing the way for them to face prosecution.

March 30: The Supreme Court takes over legislative powers, after ruling the opposition-majority National Assembly is in contempt of court in an ongoing power struggle with Maduro. “Nicolas Maduro has staged a coup,” says National Assembly speaker Julio Borges. Maduro continues resisting opposition efforts to hold a vote on removing him, vowing to continue the “socialist revolution” launched by his late predecessor Hugo Chavez.

Brazil’s foreign ministry says it is “a clear break with constitutional order.” Peru, Chile and Colombia recall their ambassadors from Caracas. The hardest line comes from the head of the Organization of American States (OAS), Luis Almagro, who in a statement echoes Maduro’s opponents’ claims of an internal “coup d’etat.” Publicly criticized for the first time from within his own camp, Maduro denies any break with constitutional order. The court later partially reverses the rulings, but keeps in place other measures limiting the assembly’s powers.

April 6: As tensions rise, a 19-year-old man is shot dead and dozens of Maduro opponents are injured in Caracas during clashes between demonstrators and security forces.

April 7: Henrique Capriles, a leader of the Venezuelan opposition and runner-up in the 2013 presidential election, is banned from politics for 15 years, preventing him from standing in 2018. The protests escalate over the following days, and the death toll rises.

April 19: Hundreds of thousands of people take to the streets of Caracas and other towns across the country in what the opposition hails as the “mother of all protests.”

April 16: Maduro announces he is deploying the army across the country.

April 19: U.S. Secretary of State Rex Tillerson says Washington is worried the Maduro government “is violating its own constitution.” Maduro denounces the U.S. for giving a “green light [to] a coup.” The opposition calls for a nationwide march in silence to the Catholic Church’s episcopal seats on April 22, and urges supporters to erect roadblocks on April 24 to grind the country to a halt.